On Business Traveller in March...

(CNN) -- Images of the mangled remains of crashed passenger planes are enough to strike fear into the hardiest of business travelers. 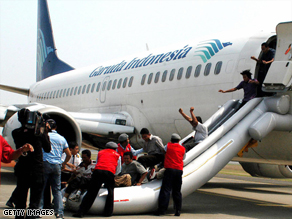 People posing as passengers take part in an anti-terrorist drill at Sukarno-Hatta airport in Jakarta.

After a spate of airline emergencies, CNN's Business Traveller examines the risks of plane travel and investigates ways to make your journey safer, in the air and on the ground.

British Airways now offers a safety course that was once only available to their pilots and cabin crew. It takes place in a hangar at London's Heathrow airport and gives participants a realistic taste of emergency procedures from crawling through a smoke filled cabin and inflating a life jacket to opening emergency doors and exiting down evacuation slides.

Barry Leonard, a passenger aboard US Airways Flight 1549 which touched down in New York's Hudson River, tells us how such time-honored procedures saved his life.

It's tempting think that five stars equals impenetrable citadel. The terrorist raids in Mumbai shattered that illusion. They raised the question of whether as much attention had been paid to security as had been paid to luxury.

Mallika Kapur reports from Mumbai on the additional security measures that have been taken by the Oberoi in light of last year's tragic events and asks whether the baggage the security checks now commonplace in airports will become a feature of upmarket hotels.

In Berlin, we check out the Presidential Suite of the Adlon Kempinski, supposedly the most secure hotel room in the world. We ask what type of business traveler requires bullet proof windows, surveillance cameras, private elevators and access to a panic room in order to get a good night's sleep.

For most of us a secure hotel room and a good insurance policy are all we need to feel safe, but the more adventurous traveler may need more elaborate protection. We look at a range of high-security fashion by the "Armani of Bullet-proof Apparel," Columbian designer Miguel Caballero.

For those of us more prone to bugs than bullets, business traveler Vanessa Emilien gives us her top tips for travel safety, and the Association of Corporate Travel Executives tell us what four items a business traveler shouldn't leave home without.