LONDON, England (CNN) -- The European Central Bank and the Bank of England both cut their key interest rates to historic lows on Thursday in a bid to revive their ailing economies. 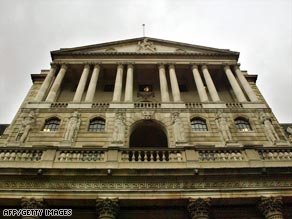 The reduction in the Bank of England's official rate is the sixth since October 2008.

But the move seemed to have little effect on stock markets as the major indexes in Europe all closed substantially down with the DAX 40 falling about five percent and the FTSE 100 about 3 percent.

In New York, the Dow, Nasdaq and S&P all closed between 4 and 4.25 percent lower.

The ECB reduced rates to 1.5 percent, the lowest in its 11-year history.

During a news conference Thursday, ECB president Jean-Claude Trichet said the bank had downgraded its predictions for growth in the 16-nation eurozone.

He said: "Recent economic data releases and survey information add further evidence to our assessment that both global and euro area demand are likely to be very weak in 2009. Over the course of 2010, the economy is expected to gradually recover."

The new quarterly projections show GDP contracting by 2.2 to 3.2 percent this year, compared with the previous estimate of -1.0 to 0.0 percent, giving a midpoint of a 2.7 percent fall.

Meanwhile, the reduction in the Bank of England's official bank rate was widely expected.

The bank, which is Britain's central bank, has been reducing rates steadily since October, when the rate was 5 percent.

The 315-year old bank's previous rate cut was in early February, when it cut the rate from 1.5 percent to 1 percent.

In addition to the rate cut, the bank announced it would pump £75 billion ($105 billion) into the economy. Known as "quantitative easing," the move is meant to encourage banks to lend funds again to each other as well as to individuals and businesses.

Despite interest rate cuts, most banks have not passed the savings on to their customers. The Bank of England wants to encourage them to do so.

The plan is that the Bank of England will "create" more money on its balance sheet, then use this to buy banks' assets such as home loans and government bonds, pumping extra cash into the system.

The banks all have accounts with the Bank of England, and the money will simply be credited to those accounts.

It may take as long as three months to carry out the program of purchases, the bank announced.

The decision to cut rates is taken on a monthly basis following a vote by the bank's Monetary Policy Committee.

In a statement the bank said the committee had introduced quantitative easing because "a further easing in monetary policy was likely to be needed" as UK inflation was likely to fall below its two percent target by the second half of 2009.

The bank also cautioned that "a very low level" rate would have "counter-productive effects on the operation of some financial markets and on the lending capacity of the banking system."