(CNN) -- Switzerland's largest bank will shed nearly 9,000 more employees as it tries to recover from the global financial crisis, its CEO said Wednesday. 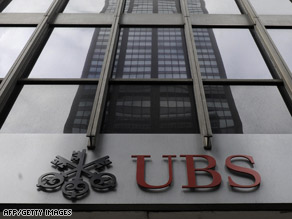 UBS is anticipating a first-quarter loss of $1.75 billion.

"We know where we have to set to work," Grubel said in the text of speech released before the meeting. "It will be a long road back to success without any quick fixes. Rather, we will move forward step by step in a rigorous and disciplined manner."

"Unfortunately, I am not able -- as yet -- to offer you any good news," Grubel said. "Instead, I am forced to present you with another round of unsatisfactory performance figures and to announce further drastic measures."

A significant number of the job losses have come in the company's investment bank unit, which suffered the largest exposure to the collapse of the U.S. subprime mortgage sector.