Fiat move for GM would create $100B giant

(CNN) -- Fiat Group, fresh from an agreement to buy a piece of troubled automaker Chrysler, has plans to purchase GM Europe and spin off the recombined carmakers into a new company. 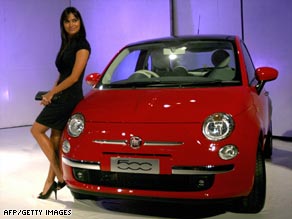 Fiat's update of the Cinquecento. The company says its small car expertise can help GM Europe get back on track.

If successful, the new company would become one of the largest car manufacturers in the world behind Toyota. The combined company would generate about $100 billion annually with sales of between 6 and 7 million cars a year.

"Clearly they're trying to take advantage of the opportunity when a lot of stakeholders may be willing to accommodate them," said John Bonnell, an auto industry analyst with JD Power and Associates.

"It may be their only opportunity to get to the kind of scale necessary to succeed in this market."

In an interview with the Financial Times, Sergio Marchionne, chief executive officer of Fiat, detailed a plan to separate Fiat Auto core car divisions and join with Opel/Vauxhall, Saab and GM's other European operations.

Last week, Fiat agreed to take an initial 20 percent of Chrysler as the U.S. manufacturer filed for bankruptcy protection.

"It's an incredibly simple solution to a very thorny problem," Marchionne told the Financial Times.

Marchionne hopes to have the deal finished by the end of this month, and list shares for the new company -- which may be called Fiat/Opel -- by the end of August.

Fiat has only recently gotten itself back on track. In his five years at the helm of Fiat, Marchionne has helped turn around the troubled Italian automaker.

Analysts say its small-car technology can help Chrysler, known for its minivans. In the past five years, Fiat has been able to regain market share in Europe with its economy fuel-saving cars as well as its luxury line, Alfa Romeo.

Marchionne is scheduled to meet with German government officials Monday to discuss the plan. Opel is GM Europe's German unit.

To secure the deal, Fiat is hoping to secure loans from the German government, raising concerns in Germany about helping to fund the Chrysler deal. The company plans to keep its plants operating in Germany, but will reduce workforce, which is likely to raise political concerns.