Europe jobs at risk as GM files for bankruptcy

LONDON, England (CNN) -- The future of thousands of car industry jobs in Europe remained uncertain Monday as General Motors filed for bankruptcy after reaching a deal to sell off its European operations, including German automaker Opel, UK-based Vauxhall and Saab. 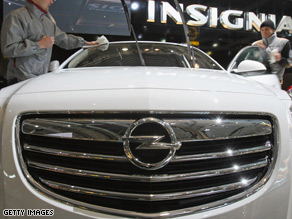 GM Europe, which includes German carmaker Opel, may have to shed 10,000 jobs as a result of the deal.

GM became the largest industrial company (and fourth-largest overall) to seek bankruptcy protection in the history of American business. The move leaves U.S. taxpayers with a 60 percent stake in the Detroit-based car giant.

Chapter 11 bankruptcy will aim to help GM emerge with only its more profitable plants, brands, dealerships and contracts. Unprofitable plants, contracts and other liabilities that the company can no longer afford will be left behind.

He praised the struggling automaker for submitting a "viable, achievable plan that will give this iconic American company a chance to rise again."

The deal reached with GM's stakeholders, Obama said at the White House, is "tough, but fair."

Obama noted that GM will receive $30 billion in additional funding from taxpayers, giving the public a 60 percent share in the company.

The government agreed to become a "reluctant" shareholder, he said, because that is the only way GM can survive.

The rescue of GM in the United States is being led by an unlikely coalition of the U.S. and Canadian governments and the company's employees and creditors.

On Saturday it was announced that a Canadian parts supplier and a Russian bank had finally reached an agreement to take control of GM's European assets, which include Opel and Vauxhall.

Watch more about the bankruptcy move »

Under the terms of the deal, Magna International will take a 20 percent stake in GM Europe, Russia's biggest bank, Sberbank, will own a 35 percent share, Opel employees will have 10 percent, while General Motors will retain a 35-percent stake.

The German government, which has led the negotiations, will provide a bridge loan to keep GM Europe operating in the short term. German Foreign Minister Frank-Walter Steinmeier described the deal as a "responsible solution" that would preserve the highest number of jobs.

Magna warned during negotiations that it would have to cut about 10,000 jobs, from GM Europe's 55,000-strong workforce. About 2,000 of the job cuts would be in Germany, Magna has said. But a top company official tried to reassure the Germans that it would try to protect the company as much as possible.

"We will, and I want to stress that again, preserve all the German Opel locations," said Magna co-Chief Executive Siegfried Wolf.

Meanwhile, Britain's Business Secretary Peter Mandelson said Sunday that Magna's bosses had given a commitment to continue Vauxhall production in the UK, but had given no details as to how long or whether job losses would follow.

He told the BBC: "I have, in the last 24 hours, spoken again to the senior executives of General Motors in Europe and again I have got their commitment reaffirmed to me as I did previously in the previous week with Magna that their commitment to Vauxhall production continuing in the United Kingdom is firm. But we have got now to pin down specific plans and specific implications for jobs."

Vauxhall employs 5,500 people in England at its plants in Luton and Ellesmere Port.

Meanwhile late on Sunday a bankruptcy judge approved the sale of most of Chrysler's assets to a group led by Italian automaker Fiat, clearing the way for the automaker to emerge from Chapter 11 protection soon.

Fiat's stake will increase to 35 percent if it reaches certain goals. The Italian carmaker also has the right to eventually acquire an additional 16 percent by buying shares, but only if outstanding debts to the U.S. Treasury and Export Development Canada are paid.

The judge's ruling allows Chrysler to leave behind the assets that it does not want, including eight factories and franchise agreements with 789 dealerships, placing thousands of jobs in jeopardy.

For GM, which is has been closely watching Chrysler's emergence from Chapter 11, Monday's bankruptcy filing is just the beginning of a major overhaul aimed at creating a much smaller company.

As part of the reorganization, GM is expected to cut 20,000 jobs and close about a dozen plants by the end of 2010.

GM will also shed its Pontiac, Saturn, Hummer and Saab brands and cut loose more than 2,000 of its 6,000 U.S. dealerships by next year. That could result in more than 100,000 additional job losses if those dealerships are forced to close.

The government takeover -- even one that aims to be temporary -- marks a dramatic turn for century-old GM, which has been brought to a whisper of insolvency by plummeting auto sales and huge losses.

General Motors has reported losses of more than $90 billion since 2005, while its share of the U.S. market has dropped to 19 percent from more than 40 percent in 1980.