Why taking unpaid leave could boost your career

LONDON, England (CNN) -- British Airways announced earlier this week that it would give all staff the option of taking one month of unpaid leave. While that could mean a financial headache for some employees, others will see it as a chance to further their career. 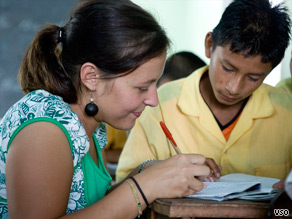 Volunteering is one way of picking up new skills while on a career break.

These days, many see a career break or sabbatical as a chance to beef up their resume with new skills and hands-on experience, and the economic downturn is providing an opportunity to do just that.

Mike Emmott is employee relations advisor with the Chartered Institute of Personnel and Development. He told CNN that sabbaticals were a feature of the last recession, in the 1990s, and that employers are again seeing sabbaticals as a tool for cutting costs short term, reducing their wage bill without having to permanently lose valued staff.

Emmott says that an uncertain job market is also prompting employees to take stock of their careers. "The recession means people don't know what they will be doing in the foreseeable future and some people will see that as an opportunity," he told CNN.

He adds that career breaks, whether enforced or voluntary, can be a chance to further your professional training or move your career in a new direction, but he cautions against using the time to simply 'weigh up your options.'

"Employers tend to be suspicious of gaps in your resume. You must be able to describe a break as something positive and say what it's done for your abilities or qualifications," he told CNN.

"Simply having gaps where you've thought about things won't be seen as positive. But volunteering overseas, for example building social facilities in Africa, will be seen as beneficial in some organizations."

Voluntary Services Overseas (VSO) is an international charity that provides volunteers for social projects in developing countries. At one time its volunteers were typically school leavers; they now have an average age of 41 and a growing number are skilled professionals.

Nina Prichard is an R&D advisor for the Welsh Assembly Government (WAG). She took a sabbatical to volunteer for VSO as pat of the WAG's Wales for Africa Framework.

Nina travelled to Ghana in March 2009 and spent seven weeks helping with a project to get Ghanaians from the private sector to volunteer time working in local government offices.

She says she had to adapt quickly to a different work culture and learned to listen and understand issues from a new perspective.

Nina described her sabbatical as "absolutely fantastic." She says she has returned to work refreshed, with a more global outlook and a desire to assess and improve things in her own work environment.

VSO's head of media and information, Catherine Raynor, told CNN that a 2006 survey carried out in conjunction with the Chartered Management Institute showed that 94 percent of employers that had released staff to volunteer overseas thought it had increased the employee's skills.

The same survey showed that 80 percent of volunteers said they returned with skills they wouldn't have acquired at home.

"People see volunteering as a stepping stone and an opportunity to enhance their skills," Raynor said.

"The work our volunteers do is about helping overseas organizations to develop, or changing the way they work to be more effective. For volunteers, that builds skills in mentoring and training, as well as conflict management and managing change, which are very relevant in the current business climate."

Raynor told CNN that the number of enquiries received by VSO has doubled since October 2008 -- and that significant number come from people with business backgrounds, rather than the public sector where jobs are more secure.

Some companies, including Accenture and AstraZeneca, operate secondment schemes with VSO. By releasing employees to work with VSO for between three and 24 months, they hope staff will return re-invigorated and armed with new skills.

Elizabeth Pagano is a founding partner of yourSabbatical.com, a U.S. consulting firm that helps companies set up sabbatical programs for their employees. She told CNN that in the U.S. 15 percent of companies offer either paid or unpaid sabbaticals, and that there are plenty of benefits for those that do.

Pagano says that just by offering a sabbatical scheme a firm can show it values its employees, which can help with staff recruitment and retention. Employees come back from their break revitalized meaning they are more productive, creative and innovative.

"For the staff left behind, covering for a work mate on sabbatical can be an opportunity to try out a new role and pick up new skills," she told CNN.

Corinne Mills is managing director of London-based Personal Career Management. She told CNN that the secret of a productive career break is having a clear goal. If you want your career to have travel prospects, use your break to work overseas and learn a new language. If you want a career in the voluntary sector, get involved in charity work.

"I think sabbaticals are a great idea at the moment," Mills told CNN.

"With the market as it is employers are happier than ever to grant sabbaticals. There is a risk your job won't be there when you come back, but at the moment that could happen if you stay."