PARIS, France (CNN) -- The French trader accused of a multi-billion-dollar fraud at banking giant Societe Generale will go on trial next year, a lawyer for the bank said Tuesday. 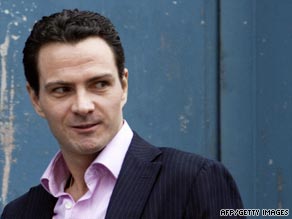 Kerviel faces up to five years in prison if convicted of fraud charges.

The trial is expected to start in the first half of 2010, perhaps in May or June, Veil said. It will take place at the Tribunal de Grande Instance in Paris, he said.

Kerviel, who is now free on bail, was arrested last year after Societe Generale unveiled trading losses of more than $7.2 billion. The bank attributed the losses to fraud by Kerviel, who traded European index futures for the bank.

Kerviel is the only one charged in the case. His assistant, Thomas Mougard, was cleared of charges Monday, Veil said.

Societe Generale believes Kerviel alone was responsible for the losses, which the bank announced in January 2008. Kerviel maintains he was not acting alone, Veil said.

"The decision of the (court) confirms 100 percent the complaint of the bank, and that Kerviel was alone when he organized this massive fraud and that he was acting completely out of his (own accord)," Veil told CNN.