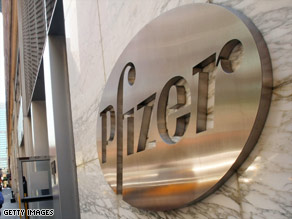 Officials from the Justice Department and the Department of Health and Human Services said the world's largest drug company promoted four drugs for use on certain ailments or at dosages that were not approved by the Food and Drug Administration.

One of those drugs was the anti-inflammatory medication Bextra, which Pfizer pulled off the market in 2005 after it was linked to increasing the risk of heart attacks and strokes.

"Pfizer promoted the sale of Bextra for several uses and dosages that the FDA specifically declined to approve due to safety concerns," the Justice Department said in a news release.

A Pfizer subsidiary, Pharmacia & Upjohn Company, agreed to plead guilty to a felony violation of the Food, Drug and Cosmetic Act for "misbranding Bextra with the intent to defraud or mislead."

Associate Attorney General Tom Perrelli told reporters that recommending drugs for uses not approved by the Food and Drug Administration creates a situation where "public health may be at risk."

"There can be a real danger for patients when medical providers are not provided with accurate and full disclosure concerning a drug's risks and benefits," he said.

The Justice Department said Pfizer sales people created sham requests from physicians asking for information about unapproved uses of certain drugs. The information was then mailed to doctors. Officials said Pfizer also entertained doctors at resorts and encouraged them to prescribe its drugs.

The Justice Department also said the pharmaceutical giant provided kickbacks to health-care providers to encourage them to prescribe other drugs, including Lipitor, Viagra and Zoloft.

Health and Human Services Secretary Kathleen Sebelius said the settlement is historic not only because of the high financial penalty to Pfizer but also because the company will be subject to "the most comprehensive corporate integrity agreement that a drug company has ever signed in the United States."

The terms call for Pfizer to conduct yearly audits and then certify it is in compliance with laws. They also require the company to create a way for doctors to report questionable behavior by Pfizer sales people, and say the company will post information on its Web site about payments and gifts to doctors.

Pfizer issued a statement saying, in part, "We regret certain actions taken in the past, but are proud of the action we've taken to strengthen our internal controls."

The Justice Department said the investigation and settlement would not have been possible without the assistance of whistle-blowers who worked at Pfizer. The settlement includes a provision for six of those whistle-blowers to split more than $100 million dollars.