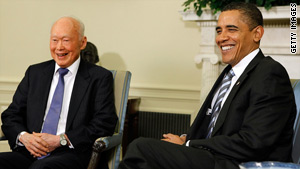 (CNN) -- As political and business leaders representing more than half of the world's economic output start to gather in Singapore for the weeklong annual summit of the Asia-Pacific Economic Cooperation, a question looms: Does APEC matter?

As the Group of 20 nations -- nearly half of which is represented by APEC member states -- ascends as the dominant global player of the world economy, the role of APEC appears at a crossroad as it celebrates its 20th anniversary.

Designed to promote Asia-Pacific trade liberalization but without power to make binding agreements such as the World Trade Organization, the question of relevancy has dogged APEC almost since its inception. In 1993, Gareth Evans, former foreign minister of Australia and chairman of the first APEC meeting, famously quipped APEC was "four adjectives looking for a noun."

"Some wag described it as an international dating service for leaders," said Charles E. Morrison, director of the East-West Center in Hawaii, a U.S.-funded organization that studies the U.S. and Asia-Pacific relations.

If it is an international dating service, there are more belles at the ball this year than ever before: the CEO summit has more than 1,500 business leaders taking part, plus the heads of state from 21 countries including the U.S., Russia, China, Japan and Australia.

Even if APEC has acted more like a matchmaker for bilateral agreements and relations among member nations than the group as a whole, that is not an insubstantial role given the extraordinary changes in the world the past 20 years, Morrison says.

"If you think about what APEC was like 20 years ago, before that you never had a meeting where the leaders of China, Japan and the U.S. got together -- never in history," Morrison said. "I think territorial issues would have festered and gotten worse (without APEC) and there would be more tendencies toward protectionism.

"It may not establish trade rules, but it deepens adherence to rules that are there and at the same time promotes free trade as the norm," he added.

C. Fred Bergsten, director of the Peterson Institute for International Economics, recently wrote the dynamism of APEC in its first decade was lost after the Asian Financial Crisis in 1997-98, which "generated strong and lasting distaste in Asia for the Washington Consensus and its institutions, especially the International Monetary Fund."

While APEC still remains an important stop for national and business leaders to meet on the sidelines, it has been marginalized as a group the past decade and "failed to adopt leadership positions on any of the key issues facing the region and the world economy," Bergstein wrote.

But others see the evolution of the G-20 as an opportunity to reinvigorate APEC as an avenue to influence global policymaking -- nine of the G-20 member nations are also APEC members.

"APEC has never had it so good," said Tan Khee Giap, chairman of the Singapore National Committee for Pacific Economic Cooperation Council. "The fact that the G-20 has nearly have its members from APEC has made APEC far more important than it ever has been in the past."