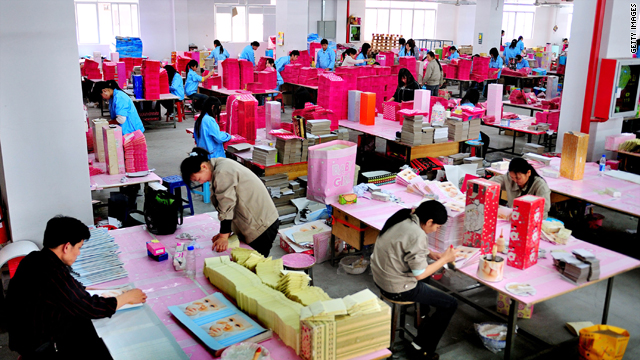 Beijing, China (FT) -- China could face a protectionist backlash next year because of a huge over- expansion of industrial capacity in recent months that may lead to a surge in cheap exports, a European business group said on Thursday.

The government's massive stimulus measures to revive the economy have exacerbated the already serious problem of manufacturing overcapacity, the European Chamber of Commerce in China said in a report. Industries such as steel, cement and plastics were still "blindly expanding", it said.

"By the second half of 2010, there will be far more dumping cases against China for unfair trading," said Joerg Wuttke, chamber president. China's over-capacity was putting "political pressure on our leaders ... We are really concerned about protectionism".

A growing number of trade measures have been aimed at Chinese goods in recent months, including a decision by the US to place duties on China-made tyres and steel pipes.

The chamber's report echoes recent official statements about the risks from the bank-led surge in investment this year. Last month, the State Council, China's cabinet, announced it was taking steps to limit capacity increases in seven sectors amid fears that over-investment would generate non-performing loans and hamper recovery.

Although the primary focus of the stimulus has been infrastructure, the spill-over effect has been continued expansion in steel, aluminium, cement and chemicals. The wind-power equipment and oil refining sectors were also facing overcapacity, the European chamber said.

Mr Wuttke estimated overcapacity in China's steel sector at 100m to 200m tonnes, or 15-30 per cent of total capacity. Much stemmed from some 150m tonnes of illegal or unauthorised capacity, equivalent to the steel industries of Japan and South Korea combined.

Overcapacity was potentially damaging not just because of the risk of bad loans, he said, but it also limited companies' ability to invest in innovation and made it harder to enforce environmental rules.

Yu Yongding, one of China's leading economists, has raised similar concerns. In a speech this week, he said there was evidence of waste in some of the spending and warned China could face "very large inflation pressure in the future".

Copyright The Financial Times Limited 2009. You may share using our article tools. Please don't cut articles from FT.com and redistribute by email or post to the web.