Court to hear case of teen strip-searched for ibuprofen

WASHINGTON (CNN) -- A 13-year-old Arizona girl who was strip-searched by school officials looking for ibuprofen pain reliever will have her case heard at the Supreme Court. 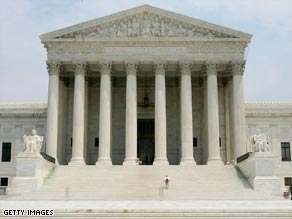 The U.S. Supreme Court will decide whether school officials were right to strip-search a student over ibuprofen.

The justices accepted the case Friday for review. They will decide whether a campus setting gives school administrators greater discretion to control students suspected of illegal activity than police are allowed in cases involving adults in public spaces.

Arguments are expected to be heard in April.

At issue is whether school administrators are constitutionally barred from conducting searches of students investigated for possessing or dealing drugs that are banned on campus.

A federal appeals court found the search "traumatizing" and illegal.

Some parents say older children deserve the same constitutional rights as adults, but educators counter that a school setting always has been treated differently by the courts. They say a ruling against them could jeopardize campus safety.

The case involves Savana Redding, who in 2003 was an eighth-grade honor student at Safford Middle School, about 127 miles from Tucson, Arizona. Earlier that day the vice principal had discovered prescription-strength ibuprofen pills in the possession of one of Redding's classmates. That student, facing punishment, accused Redding of providing her with the 400-milligram pills.

The school has a zero-tolerance policy for all prescription and over-the-counter medication, including the ibuprofen, without prior written permission.

Redding was pulled from class by a male vice principal, Kerry Wilson, escorted to an office and confronted with the evidence. She denied the accusations.

A search of Redding's backpack found nothing. Then, although she had never had prior disciplinary problems, a strip-search was conducted with the help of a school nurse and Wilson's assistant, both females. According to court records, she was ordered to strip to her underwear and her bra was pulled out. Again, no drugs were found.

In an affidavit, Redding said, "The strip-search was the most humiliating experience I have ever had. I held my head down so that they could not see that I was about to cry."

With the help of the American Civil Liberties Union, Redding and her family sued, and a federal appeals court in San Francisco, California, ruled against the school.

The court wrote: "Common sense informs us that directing a 13-year-old girl to remove her clothes, partially revealing her breasts and pelvic area, for allegedly possessing ibuprofen ... was excessively intrusive."

The court said the school went too far in its effort to create a drug- and crime-free classroom. "The overzealousness of school administrators in efforts to protect students has the tragic impact of traumatizing those they claim to serve. And all this to find prescription-strength ibuprofen."

In its appeal to the high court, the school district said requiring a legal standard of "probable cause" to conduct student searches would cast a "roadblock to the kind of swift and effective response that is too often needed to protect the very safety of students, particularly from the threats posed by drugs and weapons."

The high court has had a mixed record over the years on students' rights. The court could now be asked to clarify the extent of student rights involving searches, and the discretion of officials over those for whom they have responsibility.

All About U.S. Supreme Court • Tucson