(CNN) -- A popular Kentucky high school football coach was arraigned Monday on a reckless homicide charge in the heat-exhaustion-related death of one of his players. 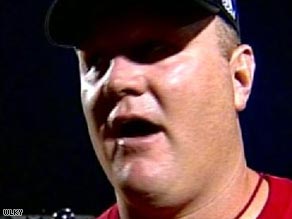 Coach Jason Stinson has been charged with reckless homicide in the heat-related death of a player.

Pleasure Ridge Park football coach Jason Stinson was released with no bail, said a spokesman for the Commonwealth's Attorney Office.

CNN affiliate WLKY reported Monday that Stinson pleaded not guilty at the arraignment.

A grand jury indicted Stinson on Thursday in the death of Max Gilpin, 15.

The player collapsed August 20 during a summer practice and died three days later. "It's a sad day," Stinson told supporters gathered on his lawn to pray Saturday, CNN affiliate WHAS reported. "My heart is broken. Part of my life has been taken away. I no longer teach, and I no longer coach at the school that I love."

The case has stirred strong feelings beyond the Louisville, Kentucky, suburb where Gilpin died. Some say the teen's death was a tragic accident; others insist it was the result of a criminal act.

Current and former students reacted with shock to the indictment -- and possible imprisonment -- of Stinson, a beloved coach and teacher.

Watch an outpouring of support for the coach »

Stengel said investigators interviewed almost 100 players, eight coaches, school officials and bystanders. A summary of the interviews was provided to the grand jury. The grand jury denied Stinson's request to give testimony.

Questions surrounding the case include what school officials did before and after the high school sophomore collapsed. Craig Webb, the school's athletic director, said in a deposition obtained by WLKY that he witnessed the incident and went over to assess Gilpin's condition.

"He was breathing," Webb said during the deposition, WLKY reported. "You know, he had a pulse. And we -- I automatically thought we might have had an exhaustion situation. He was sweating profusely."

Gilpin's body temperature reached 107 degrees and witnesses said Stinson had denied the student water on the hot August day, WLKY reported. Gilpin was rushed to an area hospital where he later died.

"The one thing people keep forgetting in this is that I lost one of my boys that day," he said on a WHAS video. "It was a boy that I loved and a boy that I cared for and a boy that meant the world to me. That's the thing that people forget. And that's a burden I will carry with me for the rest of my life."

Gilpin's parents released a statement saying they hope they will gain access to details of the investigation, including information they believe school officials have withheld from them citing confidentiality, the affiliate said.

"We intend to closely monitor the prosecution and expect anyone responsible for Max's death to be held accountable," the statement said, according to WHAS.

The parents have filed a wrongful death lawsuit against six coaches at the school. The suit claims they were negligent in their actions and that more than 20 minutes passed between the time Max Gilpin collapsed and the time one of the coaches called paramedics, according to WHAS.

Stinson is the only person who has been charged with a crime.