(CNN) -- Police in Boulder, Colorado, have told the father of JonBenet Ramsey that they are back on the case. 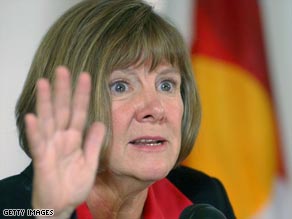 The Boulder Police Department is again the lead agency looking into the 1996 slaying of the 6-year-old beauty pageant contestant, a Ramsey family attorney told CNN.

The move comes less than a month after a new district attorney in Boulder County said he would decide whether the unsolved case should go back to the Police Department.

The district attorney's office has had responsibility for the investigation since 2002, and new District Attorney Stan Garnett said in January he planned to take a fresh look at the case.

Watch Garrett hand the case over »

Lin Wood, attorney for JonBenet's father, John Ramsey, said Monday that Boulder Police Chief Mark Beckner sent a letter to Ramsey as a courtesy to let him know the case was back with the Police Department. Beckner also said that a multiagency task force including some of the region's most experienced investigators would be created to advise police, Wood said.

Although the Ramsey case has not generated news since last year, tips and information regularly come in to authorities. Whoever is handling the investigation is charged with checking them out and deciding whether they are worth pursuing, Garnett said.

The case is one of the nation's most famous unsolved murders.

On December 26, 1996, John Ramsey discovered JonBenet's body in the basement of the family's Boulder home. The girl had been strangled and beaten. A ransom note was found on the stairs of the home, demanding $118,000.

Early in the case, Boulder police said John and his wife, Patsy Ramsey, were under "an umbrella of suspicion" in her death. But they were never formally named as suspects, and a grand jury refused to indict them. Patsy Ramsey died in 2006 after a lengthy battle with ovarian cancer.

In July, Garnett's predecessor, Mary Lacy, issued a public apology for the suspicion surrounding the Ramsey family after a test performed using new technology showed that DNA found on JonBenet's underwear and under her fingernails belonged to an unidentified man. The test results, Lacy said, were "powerful evidence" that allows investigators to think the Ramsey family were victims, not suspects.

That same third-party DNA exonerated John Mark Karr, a one-time teacher, after he was arrested in Thailand and brought to Colorado. Authorities said Karr told a University of Colorado professor in e-mails that he was involved in JonBenet's death. He told reporters after his arrest that he was with the child when she died, although he called her death an accident and said he loved her.

Lacy was widely criticized, including by then-Gov. Bill Owens, for the handling of Karr's arrest.

Boulder police also have long faced criticism over their handling of the investigation.

But, Garnett said recently, "I've been very impressed by the Boulder P.D. They are a fine department now and have handled a number of cases very well. ... They've done a very nice job."

The department has 24 investigators, four times as many as the DA's staff, he added.

Garnett was elected prosecutor in November to replace Lacy, who could not run again because of term limits. Before he was elected, he was a trial lawyer for 22 years, according to the district attorney's Web site.