ATLANTA, Georgia (CNN) -- Three former Atlanta police officers were sentenced Tuesday to prison terms ranging from five to 10 years for covering up a botched drug raid in which a 92-year-old woman was killed. 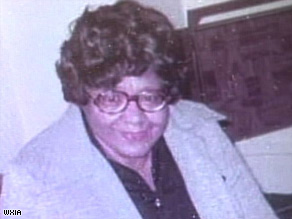 Kathryn Johnston was shot five times in a botched drug raid on her Atlanta home two years ago.

Jason Smith was sentenced to 10 years in the November 2006 raid that left Kathryn Johnston dead in a hail of bullets. Former officers Greg Junnier and Arthur Tesler were sentenced to six and five years, respectively, said Patrick Crosby, spokesman for the U.S. attorney's office for the Northern District of Georgia.

Investigators determined the raid at Johnston's home was based on falsified paperwork stating that illegal drugs were present. The incident prompted a major overhaul of the Atlanta Police Department's drug unit.

"Officers who think, as these defendants once did, that the ends justify the means or that 'taking shortcuts' and telling lies will not be discovered and punished should realize that they are risking their careers and their liberty." U.S. Attorney David Nahmias said in a written statement.

"Officers who try to obstruct justice when their misconduct faces exposure, rather than cooperating in the investigation, should realize that they will face even more severe punishment."

On Monday, Junnier broke down on the witness stand during a sentencing hearing, WXIA reported, saying, "I used to think I was a good person."

Smith said, "I pray daily for Ms. Johnston. I also pray other officers in Atlanta will have the moral fortitude I didn't have," according to WXIA.

Tesler was convicted on one state count of making false statements after filling out an affidavit saying that an informant had purchased crack cocaine at Johnston's home in a crime-plagued neighborhood near downtown Atlanta.

The informant, however, denied ever having been to Johnston's home, leading to probes by local and federal authorities as well as the breakup and reorganization of the Atlanta police narcotics unit.

The raid occurred as police were executing a so-called "no-knock" search warrant based on the faulty information. Police said Johnston fired at them with an old pistol during the raid, and they returned fire in self-defense. Johnston's one shot went through her front door and over the officers' heads; they responded with 39 shots, hitting the elderly woman five times.

Tesler's state conviction was reversed on appeal, but he pleaded guilty to the federal charge. Junnier and Smith face sentencing March 5 on state charges including voluntary manslaughter, but according to their plea agreement, their sentence will be served at the same time as the federal sentence, authorities said.

Shortly after the federal probe began, however, Junnier began cooperating with authorities, providing "valuable assistance in the investigation and prosecution of Smith and Tesler," according to the statement issued by Nahmias' office. Smith also cooperated "to a more limited extent," the statement said, adding that both Junnier and Smith's sentences were reduced because of their cooperation.

Prosecutors have said that the officers regularly presented false information to obtain warrants and that they cut corners to make more time for lucrative side jobs providing additional security to businesses, often while on duty, and receiving cash payments.

"As Atlanta police narcotics officers, these three defendants repeatedly failed to follow proper procedures and then lied under oath to obtain search warrants," Nahmias said. "Their routine violations of the Fourth Amendment led to the death of an innocent citizen."

The investigation into the raid at Johnston's home also led to guilty pleas from the police sergeant in charge of the narcotics unit and another officer who admitted to extortion, prosecutors said.