ATLANTA, Georgia (CNN) -- Four people in two states have been arrested as part of an investigation into the Final Exit Network, an organization that police believe helped a Georgia man end his life in June, authorities said Thursday. 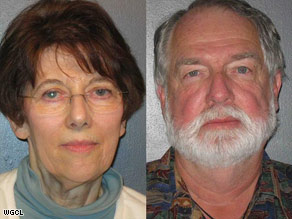 Claire Blehr, 76, of Georgia, and Thomas E. Goodwin, 63, of Florida and Georgia, were two of the four arrested.

The GBI on Wednesday set up a sting operation at a residence in adjoining Dawson County, using an undercover agent who had posed as a terminally ill man seeking assistance with his suicide, the statement said.

Claire Blehr, 76, of Atlanta, Georgia, and Thomas E. Goodwin, 63, of both Punta Gorda, Florida, and Kennesaw, Georgia, were arrested, the GBI said.

All four face charges of assisted suicide, tampering with evidence and violation of the Georgia's Racketeer Influenced and Corrupt Organizations Act, the GBI said.

The Final Exit Network, based in the north Atlanta suburb of Marietta, identifies itself on its Web site as "an all-volunteer organization dedicated to serving people who are suffering from an intolerable condition. Network volunteers offer you counseling, support and even guidance to self-deliverance at a time and place of your choosing, but you always do the choosing. We will never encourage you to hasten your death."

"They were rebuilding the whole mouth," she said. "He was suffering terribly, that I know."

She said her son had undergone numerous surgeries and "sounded depressed." When he died, she said she had no idea his death might have been a suicide.

In a statement released by the GBI, Celmer's widow, Susan, said that she and her family "are gratified that the GBI and other law enforcement agencies have pursued this matter vigorously and that their investigation has led to the arrests reported today." She said she will not comment further and requested privacy, referring future questions to her attorneys.

An e-mail to Jerry Dincin, a man listed as Final Exit Network's vice president and treasurer on its Web site, was not answered Thursday. A call to Final Exit was answered by a recording.

The method used in the suicide was helium inhalation, according to the GBI statement.

People pay $50 to join the Final Exit Network, according to the GBI, and complete an application process. They are then visited by an "exit guide" assigned to the case.

Goodwin and Blehr were told the GBI agent suffered from pancreatic cancer, The Atlanta Journal-Constitution reported.

At the Dawson County residence on Wednesday, Goodwin allegedly walked the undercover agent through the steps and demonstrated how he would hold the agent's hands to stop him from removing the exit bag, Bankhead said.

Goodwin's former neighbors in Kennesaw told CNN he moved to Florida a few years ago but still owns his large home there and returns to check on it occasionally.

Kay Makarenko, 69, who lives behind Goodwin's home, said she was shocked to hear of his arrest. "I said, 'It can't be the same Ted Goodwin.' "

After the arrests Wednesday, authorities in Georgia, Florida, Maryland, Michigan, Ohio, Missouri, Colorado and Montana began executing search warrants and conducting interviews as part of the probe into the Final Exit Network, the GBI said, adding that GBI agents were in each state except Colorado to assist.

In Phoenix, Arizona, police have linked the 2007 death of a 58-year-old woman to the Final Exit Network, Maricopa County Attorney Andrew Thomas said Wednesday, according to CNN affiliate KPHO-TV in Phoenix.

Thomas said the woman, Jana Van Voorhis, was not terminally ill but suffered from mental illness and depression. He said a police investigation turned up records of visits from Final Exit guides to Voorhis, according to KPHO. No arrests have been made, but Thomas said he expects his office to wrap up its investigation and decide if charges are warranted within 60 days.

CNN affiliate WDIV-TV in Detroit, Michigan, reported that search warrants were executed regarding two Michigan residents who sit on Final Exit's board of directors.

The Final Exit Network Web site features a "Wall of Fame" with photos of Dr. Jack Kevorkian, among others. Kevorkian was released on parole in June 2007 after serving more than eight years of a 10- to 25-year sentence in the 1998 death of a man suffering from amyotrophic lateral sclerosis, also known as Lou Gehrig's disease.

"We believe the needs of those who are suffering are paramount," the organization says. "We applaud the work of organizations that seek legislative action to strengthen our right to die a peaceful and painless death at the time and place of our choosing. However, we feel that legislative change will not come soon enough for the many people who need help now and in the interim."

Betty Celmer, meanwhile, declined to share her thoughts on assisted suicide or the Final Exit Network's alleged involvement in her son's death, saying she lacks specifics.

"He's in a far better place," she said. "That's the only comment I'm going to make."

CNN's Ashley Broughton and Jim Kavanagh contributed to this report.

All About Suicide • Georgia • Georgia Bureau of Investigation