SAN FRANCISCO, California (CNN) -- An Oakland, California, police officer who was critically wounded in a weekend gunbattle with a suspect has died, the Alameda County Coroner's Office told CNN on Tuesday. 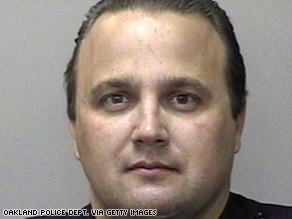 John Hege, 41, had been pronounced brain dead Sunday. Police initially had said he was the fourth officer to die after a gunman opened fire on police in two separate incidents.

But they later clarified that while Hege was pronounced brain dead, his body was being kept on life support until a decision could be made on an organ donation.

Oakland police did not immediately respond to a CNN query Tuesday on what decision was made. However, the San Francisco Chronicle quoted Hege's father, John S. Hege, as saying his son's organs would be donated.

After the officers were shot, the alleged gunman -- Lovelle Mixon, 26, of Oakland -- was fatally shot in a gunbattle with SWAT officers in a nearby apartment complex where he was hiding.

Authorities said Saturday night that Mixon had an extensive criminal history and was in violation of parole for assault with a deadly weapon.

Immediately afterward, emergency dispatchers received reports that two officers had been shot, were down at the scene and needed help, he said. Those officers were Hege and Sgt. Mark Dunakin, 40, an 18-year veteran of the force. Dunakin died Saturday.

Soon after the first shooting, police launched an intense manhunt to track down the gunman. An anonymous caller directed authorities to a building on an adjacent street where he was believed to be barricaded, said acting Police Chief Howard Jordan.

The gunman opened fire on SWAT officers who entered the apartment, hitting two more officers, before police returned fire, killing the suspect, Jordan said. Those two officers -- Sgt. Ervin Romans, 43, and Sgt. Daniel Sakai, 35 -- were also killed. Police said Romans had been with the department since 1996 and Sakai since 2000.

A fifth officer was treated at a hospital and released after being grazed by a bullet, police spokesman Jeff Thomason said Saturday.

It was the deadliest attack on California law enforcement since 1970, when four California Highway Patrol officers were shot and killed by two men in the Santa Clarita Valley, the Chronicle said.

On Monday, police said in a statement that a "tentative match" had been established to Mixon from evidence recovered from a February sexual assault. "Mixon is the primary suspect in the sexual assault case," the statement said. "OPD is continuing our investigation into this matter." However, the statement said, "a tentative match is not a 100 percent match; it is considered to be a probable match. Further tests will be done on the DNA in question."

California Gov. Arnold Schwarzenegger, in a statement Saturday, said flags at the state capitol would be flown at half-staff in honor of the officers.

All About Oakland Police Department • Murder and Homicide • Organ Donation