BOSTON, Massachusetts (CNN) -- A 22-year-old medical student suspected of killing a woman he may have met through a Craigslist online ad was arraigned Tuesday and will be held without bail. 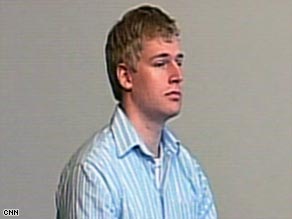 Philip Markoff, a second-year student at Boston University's School of Medicine, listened intently but did not speak during the hearing in Boston Municipal Court. Dressed in a blue-striped shirt and slacks, Markoff was handcuffed and wearing leg irons.

His attorney, John Salsberg, told reporters after the hearing that Markoff is "not guilty of the charges. He has his family's support. I have not received any document or report or piece of evidence other than what I heard in the courtroom. All I have at the moment are words -- no proof of anything."

A woman identifying herself as Markoff's fiancee also maintained his innocence in an e-mail sent to ABC News. Megan McAllister said Markoff "is the wrong man" and "was set up."

"Unfortunately, you were given wrong information as was the public," McAllister wrote. "All I have to say to you is Philip is a beautiful person inside and out and could not hurt a fly!"

She accused Boston police of "trying to make big bucks by selling this false story to the TV stations. What else is new??"

Suffolk County District Attorney Daniel Conley told reporters, "This was a brutal, vicious crime -- savage. And it shows that Philip Markoff is a man who's willing to take advantage of women -- to hurt them, to beat them, to rob them."

A Boston University spokeswoman said the school suspended Markoff, who has no criminal record, when it learned of the charges on Monday.

Markoff is charged with killing 26-year-old Julissa Brisman of New York on April 14 at Boston's Copley Marriott Hotel. Evidence from the scene suggests that Brisman "put up a fight," prosecutor Jennifer Hickman said during the hearing Tuesday. Police said Brisman, a model, advertised as a masseuse on Craigslist, a popular online classifieds service.

She sustained blunt head trauma, Hickman said, and was shot three times at close range. One of those bullets passed through her heart, killing her, she said.

Markoff is also charged in connection with the robbery four days earlier of a woman at a Westin Hotel. In that case, the woman made arrangements to meet a man through Craigslist for a massage at the hotel, but was held at gunpoint and bound, Hickman said. She was robbed of $800 and personal items, and left tied to a door handle with duct tape over her mouth, Hickman said in court Tuesday. Police said earlier the Westin victim was 29. She was not identified.

Authorities believe the motive in Brisman's death was robbery, Conley told reporters, and she was killed during a struggle. In executing a search warrant at Markoff's home, police found a firearm, along with restraints and duct tape, he said.

Surveillance videos from the hotel where Brisman was murdered showed a tall, clean-cut young blond man in a black windbreaker leaving the property, according to Boston police, who sought public assistance identifying the man.

Police traced the Internet communications with Brisman to an e-mail account opened the day before her death, Conley said. Using Internet provider information, they found the computer was at Markoff's residence in Quincy, Massachusetts, he said. Authorities put the home under surveillance, Conley said, and "the case just begins to build from there."

"This poor woman, Julissa Brisman, no matter what choices she made or decisions she made in life, she is a human being who's entitled to dignity and respect," Conley said.

There may be more victims that authorities are unaware of, he said, adding that the prosecutor's goal is to hold Markoff accountable, not to pursue women who may be advertising on Craigslist. "If you have been a victim like these victims have, please come forward," he said.

Markoff is "bearing up," according to attorney Salsberg.

"It's obviously a difficult time for anybody in these circumstances with the charges that have been brought against him. ... He's pleaded not guilty. He is not guilty," said Salsberg.

McAllister, in her e-mail to ABC, wrote, "Philip is an intelligent man who is just trying to live his life, so if you could leave us alone we would greatly appreciate it. We expect to marry in August and share a wonderful, meaningful life together."

The couple's wedding Web site had been taken down or was unavailable as of Tuesday afternoon.

Authorities in Boston are working with police in Warwick, Rhode Island, on what could be a related case. On April 16 at a Holiday Inn Express in Warwick, a man tied up and demanded money from a 26-year-old dancer who had posted a Craigslist advertisement, Warwick Police Chief Col. Stephen McCartney said.

The robbery was interrupted when the woman's husband entered the room. After pointing his gun at the husband, the suspect fled, McCartney said. He said no conclusions could be made yet, but allowed that the incident "may be related to similar crimes occurring in the Boston area."

Craigslist CEO Jim Buckmaster told CNN the company is "horrified and deeply saddened that our community services have been associated in any way whatsoever with a crime of violence." He promised that Craigslist will evaluate the incident to see if additional measures could be introduced to protect users.

CNN's Mary Snow and Jason Kessler contributed to this report.