DENVER, Colorado (CNN) -- A Colorado man was convicted of first-degree murder and a bias-motivated crime and sentenced to life in prison for killing a transgender teen he met on an online social networking site. 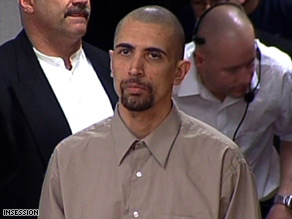 Allen Andrade was convicted of first-degree murder and a hate crime in the slaying of a transgender teen.

It was the first time in the nation that a state hate crime statute resulted in a conviction in a transgender person's murder, the advocacy group Gay & Lesbian Alliance Against Defamation said.

Seated in the front row of the courtroom, the family of Angie Zapata broke out in tears as the verdicts against Allen Andrade were read Wednesday.

The jury deliberated for just under two hours before returning the verdict shortly after 3 p.m.

Watch Andrade listen to the verdict »

"I lost somebody so precious," said Maria Zapata, the victim's mother. She glanced at Andrade and continued: "The only thing he can't take away is the love and the memories that I have of my baby. My beautiful, beautiful baby."

Andrade spoke just one word. "No," he said when asked if he wished to address the court.

Judge Marcelo Kopcow then imposed the mandatory sentence for the first-degree murder conviction -- life in prison without parole.

Watch Andrade get sentenced to life without parole »

The verdict was hailed by gay and transgender rights groups.

"This is a landmark decision," said Mindy Barton, the legal director of the Gay, Lesbian, Bisexual and Transgender Community Center of Colorado. Barton attended the trial daily.

"Hearing 'guilty on first-degree murder' and 'guilty of bias-motivated crime' was a hugely emotional experience for all the family, friends and the supporters of Angie," Barton added.

"She will not be forgotten."

Andrade admitted killing Zapata, but his defense argued that he acted in the heat of passion after discovering that Zapata was biologically male. The defense asked for a lesser verdict, such as second-degree murder or manslaughter.

Throughout the trial, prosecutors referred to Zapata as "she," while the defense referred to the transgender teen, who was born Justin Zapata, as "he."

"When [Andrade] met him, he met him as 'Angie,' " defense attorney Annette Kundelius argued on Wednesday. "When he found out it wasn't 'Angie,' that it was 'Justin,' he lost control."

But the jury rejected the argument, deciding in favor of prosecutors, who argued that Andrade knew Zapata was biologically male and that knowledge motivated the crime.

Zapata was "born in a boy's body but living as a female," added Miller. "Ultimately, she was murdered because of it."

The case has become a rallying point for supporters of the transgender community, who have held vigils and launched Web sites in remembrance of Zapata.

According to prosecutors, Zapata, 18, and Andrade, 32, met online in summer 2008 and arranged to meet. Zapata brought Andrade to her apartment in Greeley, Colorado, where they spent nearly three days together.

According to a police affidavit, Zapata was out of the apartment when Andrade noticed photographs that made him "question victim Zapata's sex."

Andrade confronted Zapata, who declared, "I am all woman." Andrade then grabbed Zapata and discovered male genitalia.

According to court records, Andrade told police he began hitting Zapata with his fists, knocking her to the ground. He then grabbed a fire extinguisher and twice hit her in the head.

Andrade told police he thought he had "killed it," referring to Zapata, and covered her with a blanket. Realizing what he had done, he then cleaned up the crime scene, the affidavit said.

Andrade told police he heard "gurgling" sounds coming from the victim and saw Zapata sitting up. He hit her again with the fire extinguisher, he said, according to the affidavit.

The jury heard jailhouse phone conversations, including Andrade telling a girlfriend "gay things must die." He did not testify in his own defense.

Zapata was 16 when she adopted the name "Angie," and made the decision to live as a woman.

All About Hate Crimes • Murder and Homicide • Greeley (Colorado)