TENAHA, Texas (CNN) -- Roderick Daniels was traveling through East Texas in October 2007 when, he says, he was the victim of a highway robbery. 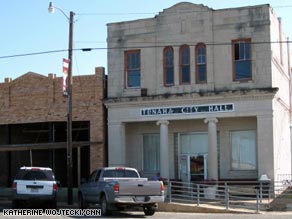 Police in the small East Texas town of Tenaha are accused of unjustly taking valuables from motorists.

The Tennessee man says he was ordered to pull his car over and surrender his jewelry and $8,500 in cash that he had with him to buy a new car.

But Daniels couldn't go to the police to report the incident.

The men who stopped him were the police.

Daniels was stopped on U.S. Highway 59 outside Tenaha, near the Louisiana state line. Police said he was driving 37 mph in a 35 mph zone. They hauled him off to jail and threatened him with money-laundering charges -- but offered to release him if he signed papers forfeiting his property.

"I actually thought this was a joke," Daniels told CNN.

"To be honest, I was five, six hundred miles from home," he said. "I was petrified."

Now Daniels and other motorists who have been stopped by Tenaha police are part of a lawsuit seeking to end what plaintiff's lawyer David Guillory calls a systematic fleecing of drivers passing through the town of about 1,000.

The latest on the lawsuit claiming police are shaking down drivers in Texas on AC360.
Tonight, 10pm ET

"I believe it is a shakedown. I believe it's a piracy operation," Guillory said.

Texas law allows police to confiscate drug money and other personal property they believe are used in the commission of a crime. If no charges are filed or the person is acquitted, the property has to be returned. But Guillory's lawsuit states that Tenaha and surrounding Shelby County don't bother to return much of what they confiscate.

Jennifer Boatright and Ron Henderson said they agreed to forfeit their property after Russell threatened to have their children taken away.

Like Daniels, the couple says they were carrying a large amount of cash --- about $6,000 -- to buy a car. When they were stopped in Tenaha in 2007, Boatright said, Russell came to the Tenaha police station to berate her and threaten to separate the family.

"I said, 'If it's the money you want, you can take it, if that's what it takes to keep my children with me and not separate them from us. Take the money,' " she said.

The document Henderson signed, which bears Russell's signature, states that in exchange for forfeiting the cash, "no criminal charges shall be filed ... and our children shall not be turned over" to the state's child protective services agency.

Maryland resident Amanee Busbee said she also was threatened with losing custody of her child after being stopped in Tenaha with her fiancé and his business partner. They were headed to Houston with $50,000 to complete the purchase of a restaurant, she said.

"The police officer would say things to me like, 'Your son is going to child protective services because you are not saying what we need to hear,' " Busbee said.

Guillory, who practices in nearby Nacogdoches, Texas, estimates authorities in Tenaha seized $3 million between 2006 and 2008, and in about 150 cases -- virtually all of which involved African-American or Latino motorists -- the seizures were improper.

"They are disproportionately going after racial minorities," he said. "My take on the matter is that the police in Tenaha, Texas, were picking on and preying on people that were least likely to fight back."

Daniels told CNN that one of the officers who stopped him tried on some of his jewelry in front of him.

"They asked me, 'What you are doing with this ring on?' I said I had bought that ring. I paid good money for that ring," Daniels said. "He took the ring off my finger and put it on his finger and told me how did it look. He put on my jewelry."

Texas law states that the proceeds of any seizures can be used only for "official purposes" of district attorney offices and "for law-enforcement purposes" by police departments. According to public records obtained by CNN using open-records laws, an account funded by property forfeitures in Russell's office included $524 for a popcorn machine, $195 for candy for a poultry festival, and $400 for catering.

And one check for $10,000 went to Barry Washington, a Tenaha police officer whose name has come up in several complaints by stopped motorists. The money was paid for "investigative costs," the records state.

Washington would not comment for this report but has denied all allegations in his answer to Guillory's lawsuit.

"This is under litigation. This is a lawsuit," he told CNN.

Russell refused requests for interviews at her office and at a fundraiser for a volunteer fire department in a nearby town, where she also sang. But in a written statement, her lawyers said she "has denied and continues to deny all substantive allegations set forth."

Russell "has used and continues to use prosecutorial discretion ... and is in compliance with Texas law, the Texas constitution, and the United States Constitution," the statement said.

Bowers, who has been Tenaha's mayor for 54 years, is also named in the lawsuit. But he said his employees "will follow the law."

"We try to hire the very best, best-trained, and we keep them up to date on the training," he said.

The attention paid to Tenaha has led to an effort by Texas lawmakers to tighten the state's forfeiture laws. A bill sponsored by state Sen. John Whitmire, D-Houston, would bar authorities from using the kind of waivers Daniels, Henderson and Busbee were told to sign.

"To have law enforcement and the district attorney essentially be crooks, in my judgment, should infuriate and does infuriate everyone," Whitmire said. His bill has passed the Senate, where he is the longest-serving member, and is currently before the House of Representatives.

Busbee, Boatright and Henderson were able to reclaim their property after hiring lawyers. But Daniels is still out his $8,500.

"To this day, I don't understand why they took my belongings off me," he said.

All About Texas • Police