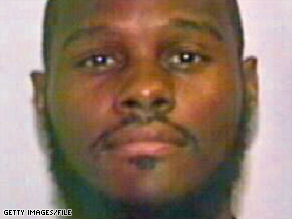 Narseal Batiste, 35, was the only defendant found guilty of all four conspiracy charges.

The six suspects were arrested in June 2006 for allegedly conspiring to blow up buildings, including the 110-story Sears Tower, the nation's tallest building, in Chicago, Illinois; the FBI's Miami office and others.

The suspected ringleader, Narseal Batiste, 35, was the only defendant found guilty of all four conspiracy charges, including conspiring to incite a rebellion against the United States, supplying materials to a terror organization and terrorists, and conspiring to destroy buildings with explosives.

The sixth defendant, Naudimer Herrera, 25, was acquitted on all four counts.

"The jury has spoken," Abraham's attorney, Albert Z. Levin, told CNN after the verdicts. "And we anxiously await our day in the court of appeals."

Nathan Clark, attorney for Rotschild Augustine, indicated his client would also appeal, saying, "The fight has only just begun."

The terror trial in Miami was the third held for the defendants. Juries have twice deadlocked on verdicts for the group of homeless men initially known as the "Liberty City 7," for the Miami neighborhood where authorities say they operated.

In the first trial, a mistrial was declared after nine days of deliberations in December 2007, although a seventh defendant was acquitted. The jury in the second trial deadlocked in April 2008 after deliberating for 13 days.

A sticking point for the first two juries was whether the defendants were actually seriously plotting with al Qaeda as the prosecutors alleged or if they were simply struggling young men who were looking to con an FBI informant out of money, as the defense alleged.

Authorities have said the men did not have explosives or weapons and that their plans appeared "more aspirational than operational." The investigation began after an Arabic speaker contacted authorities, saying that Batiste approached him about waging "jihad" in the United States.

Investigators then planted among the group an undercover informant, who claimed to be an al Qaeda member who helped plan the attack on the USS Cole in 2000. A federal raid on the group's Liberty City warehouse in 2006 revealed a receipt for purchase of a gun, as well as ammunition, marijuana, two credit cards, 10 euros, three machetes, two swords, an ax, uniforms and a flight suit.

On a surveillance videotape played during trial, Batiste could be heard saying he was "very grateful" to Osama bin Laden and "loved" the al Qaeda leader's work. He also said he respected bin Laden and wanted to meet him someday.

In other excerpts, Batiste told the informant his people needed training, and they discussed going to Chicago because the city has underground trains and tunnels.

All About Terrorism • Federal Bureau of Investigation • U.S. Department of Justice