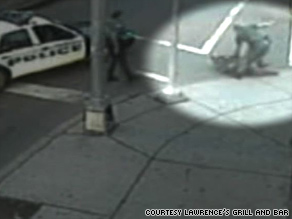 The beating was captured on surveillance cameras outside Lawrence's Grill and Bar in Passaic, New Jersey.

Surveillance tape from Lawrence's Grill and Bar in Passaic on May 29 shows a police car pull up to Ronnie Holloway, who is standing still on the curb outside the restaurant. After a few moments Holloway zips up his sweatshirt -- because the female officer in the car instructed him to do so, Holloway said.

At that point, the other officer in the vehicle, Joseph R. Rios III, exits the car, grabs Holloway and slams him onto the hood of the police car. He then pummels Holloway with his fist and baton.

Holloway said he had exchanged no words with the officer before he pounced on him.

After the incident, police locked Holloway in a holding cell for the night and did not provide treatment for his injuries, according to Holloway's attorney, Nancy Lucianna. Those injuries included a torn cornea and extensive bruising to the left side of his body, she said.

Holloway is schizophrenic, according to his mother, Betty, with whom he has lived for more than 20 years. But Holloway's attorney says that is not the full extent of his mental disabilities and that her client was "mentally challenged on multiple levels."

At the time of the incident, Holloway told CNN, he was in the midst of a walk around the neighborhood. His attorney described such walks as his chief pastime.

The Passaic Police have filed three charges against Holloway: resisting arrest, disorderly conduct and wandering for the purpose of obtaining controlled dangerous substances.

Holloway's attorney maintains her client is innocent of all charges and adds that "nothing that Ronnie Holloway was doing would warrant" the pounding he received.

Betty Holloway said she cannot bear to watch the tape of her son's beating.

Holloway said the experience has left him with a range of scars spanning the literal and the figurative. "To think about it hurts. And the physical part, yes, he was really whooping me."

The Passaic Police Department and Rios did not respond to calls for comment.

All About Passaic • Schizophrenia