WASHINGTON (CNN) -- A handwritten message in a notebook found in the car of the man accused of fatally shooting a Holocaust museum security guard boasted, "You want my weapons -- this is how you'll get them," an FBI criminal complaint says. 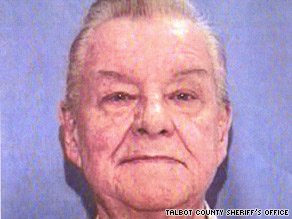 The purpose of the complaint is to establish probable cause for bringing charges against white supremacist James von Brunn, 88, in the shooting death Wednesday of a security guard at the U.S. Holocaust Memorial Museum.

Von Brunn is charged with a federal count of murder, according to court documents. If convicted, said acting U.S. Attorney Channing Phillips, he would face a mandatory sentence of life in prison without parole and, if certain criteria are met, could face the death penalty.

Von Brunn also is charged with killing while in possession of a firearm in a federal facility.

He remained hospitalized in critical condition Thursday from shots fired by other security guards. The complaint says he was shot in the face and fell backward outside the museum's front door.

Stephen Tyrone Johns, the security guard who was shot to death, had opened the door for the gunman, who then raised a rifle and killed him, authorities told reporters Thursday.

Johns, 39, "was kind enough to open the door, allowing him to enter," Lanier said. "As he entered, he raised the rifle and shot special police Officer Johns."

According to the complaint, Johns was shot in the left upper chest area. He died at a hospital.

The notebook discovered by police also contained other messages from the man who flaunted his anti-Jewish, anti-black beliefs.

"The Holocaust is a lie. Obama was created by Jews. Obama does what Jew owners tell him to do. Jews captured America's money. Jews control the mass media. The First Amendment is abrogated -- henceforth," an excerpt said.

At the end of the writings was the signature: James W. von Brunn.

The Holocaust museum, which is near the Washington Monument and other popular tourist attractions, remained closed Thursday, its flags lowered to half-staff in tribute to Johns.

A six-year veteran of the museum's security staff, Johns was hailed as a hero by Washington Mayor Adrian Fenty and other officials.

Johns was a resident of Temple Hills, Maryland, according to a statement issued by Wackenhut Services Inc., which provided security services at the museum since 2002.

Johns "died heroically in the line of duty," said Sara Bloomfield, director of the museum.

"Obviously there are no words to express our grief and shock over the horrific event that took place at this museum today," Bloomfield said.

See where the museum is located »

The Southern Poverty Law Center, which focuses on human rights, said von Brunn has "an extremely long history with neo-Nazis and white supremacists."

Discussion: Is the U.S. too tolerant of hatemongers? »

He has repeatedly claimed "The Diary of Anne Frank," an iconic diary written by a teenage girl who was hiding from Nazis with her family, was a hoax. Johns was killed on the day the museum was to stage a play based on Anne Frank and two days before what would have been her 80th birthday.

Joseph Persichini Jr., assistant director in charge of the FBI's Washington Field Office, said at a news conference that police were investigating whether the killing of Johns, who was black, might be considered a hate crime.

Von Brunn served six years in prison for trying in 1981 to kidnap Federal Reserve Board members because of high interest rates. He blamed his prison term on a "Negro jury, Jew/Negro attorneys" and "a Jew judge," he said on his Web site.

One of many questions is whether von Brunn, as a convicted felon, should have been barred from owning weapons.

Witnesses to the shooting described blood on the floor and chaos within the museum's halls.

"It was definitely a security guard; he was down bleeding on the floor," said Hernandez, 19. "He was face down. His back ... blood was coming out."

Watch Hernandez describe what she saw »

Sirens blared as emergency vehicles converged on the area. The museum was full at the time, with a "couple of thousand" people inside, said William Parsons, chief of staff at the museum.

"Never take your guard force and security people for granted," he said. "They did exactly what they were supposed to do to protect people in the museum."

Watch another museum visitor tell what he saw »

The shooting sent shock waves throughout the nation's capital and elsewhere.

"I am shocked and saddened by today's shooting at the U.S. Holocaust Memorial Museum," said President Obama, who just days earlier had spoken emotionally about the Holocaust when he visited Buchenwald, a former Nazi concentration camp with Holocaust survivor and Nobel Peace Prize laureate Elie Wiesel.

"This outrageous act reminds us that we must remain vigilant against anti-Semitism and prejudice in all its forms," Obama said Wednesday.

Law enforcement analyst talks about how this could have happened »

Israel issued a statement through its embassy, expressing sadness and condemning the attack.

The Anti-Defamation League said the shooting "reminds us in the starkest way where the spread of hatred can lead."

The Council on American-Islamic Relations condemned "this apparent bias-motivated attack" and said it stands "with the Jewish community and with Americans of all faiths in repudiating the kind of hatred and intolerance that can lead to such disturbing incidents."

Watch a discussion of what fuels hate crimes »

The museum canceled a performance scheduled for Wednesday night of a play about racism and anti-Semitism, based on a fictional meeting between Anne Frank and Emmett Till, the teenage victim of a racist killing in the United States.

Attorney General Eric Holder and Rep. Steve Cohen, D-Tennessee, were among those planning to attend the play, which was written by Janet Langhart Cohen, the wife of former Defense Secretary and U.S. Sen. William Cohen.

Watch the Cohens describe what happened »