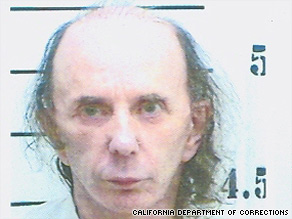 Spector, who was convicted of second-degree murder and sentenced last month in Clarkson's 2003 shooting death, will be housed at the California Substance Abuse Treatment Facility and State Prison in Corcoran.

However, "he is not in any of the therapy or treatment facilities at the prison," said Terri Thornton, a California Department of Corrections spokeswoman.

Spector is housed in a "sensitive-needs yard" at the prison -- the largest prison by area in the state. It functions like a general population yard, Thornton said, "but it is for inmates with safety concerns, such as celebrities, gang dropouts or those whose crimes make them a target of other prisoners."

Spector's accommodations are standard, with the exception that the cells are slightly larger to accommodate wheelchairs should inmates need them, which he does not, prison spokesman Steven Smith said.

There are several therapy and education programs for inmates, but Thornton said she is not sure whether Spector will participate in them. Inmates who do can work toward a modest reduction of their sentences.

Spector is not the first celebrity to serve a sentence at the facility south of Fresno; actor Robert Downey Jr. served time there in 1999 for probation violation of a drug charge.

The California Substance Abuse and Treatment Facility and State Prison houses 6,919 inmates. Although it is in Corcoran, it is a separate facility from Corcoran State Prison, where Charles Manson is serving his life sentence.

All About Phil Spector