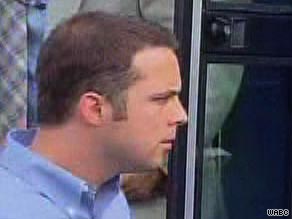 Hoboken, New Jersey, Mayor Peter Cammarano III is among those arrested in the public corruption probe.

Defendants were to begin appearing Thursday afternoon in U.S. District Court in Newark.

Among the 15 are five rabbis, including the national leader of the Syrian Jewish community. They are alleged to have laundered more than $3 million in a "high-volume, international money-laundering conspiracy," Marra said. Their alleged dealings stretched to Israel and Switzerland.

The rabbis named in the criminal complaints are accused of setting up charitable tax-exempt organizations at their synagogues that they used to launder money.

According to the criminal complaints, a confidential witness working for federal authorities approached the rabbis and offered to make donations to the charities in return for the rabbis writing back a check to the undercover agent. The rabbis collected a fee for the service by writing a smaller check back, sometimes returning $45,000 for a $50,000 donation to the charity, the complaints said.

Charges against the rabbis include bankruptcy fraud, bank fraud and trafficking in counterfeit goods.

Marra said more than $650,000 in bribes was paid to those accused in the criminal complaints. "And the politicians willingly put themselves up for sale," he said.

"The [criminal] complaints show that for these defendants corruption was a way of life. They existed in an ethics-free zone, and they exploited giant loopholes in the state's contribution rules."

Investigators charged one man with conspiring to broker -- for a fee of $160,000 -- the sale of a human kidney for transplant.

Levy Izhak Rosenbaum of Brooklyn, New York, offered to obtain a kidney -- in return for the fee -- for an undercover FBI agent and confidential witness working for authorities, a criminal complaint said.

One of the complaints alleges that Cammarano, 32, took about $25,000 in bribes from a government witness posing as a real estate developer. The U.S. attorney's office said Smith, 60, and an aide took $15,000 in bribes "to help get approvals from high-level state agency officials for building projects."

Another complaint alleges that Van Pelt, 44, accepted $10,000 in cash as "consulting fees" after an FBI official posing as a real-estate executive asked him to help fast-track a real estate project in Waretown, New Jersey, a section in Van Pelt's district.

Others arrested in the public corruption portion of the investigation include Secaucus Mayor Dennis Elwell, 64, who is president of a family-owned trucking company; Ridgefield Mayor Anthony Suarez, 42; and Jersey City Deputy Mayor Leona Beldini, 74, the U.S. attorney's office said.

Learn more about some of the officials taken into custody »

The arrests for public corruption and money laundering underscore "the pervasive nature of corruption in this state," Marra said.

Investigators searched about 20 locations in New Jersey and New York to recover "large sums of cash and other evidence of criminal conduct," prosecutors said in a news release. They also executed 28 seizure warrants against bank accounts that they believe were involved in laundering money.

The arrests should be "a clarion call that prompts significant change in the way business and politics are conducted in the state of New Jersey," said Weysan Dun, special agent in charge of the FBI's office in Newark.

"The list of names and titles of those arrested today sounds like a roster for a community leaders meeting," he said in a statement. "Sadly these prominent individuals were not in a meeting room but were in the FBI booking room this morning."

In a statement, New Jersey Gov. Jon Corzine said, "Any corruption is unacceptable -- anywhere, anytime, by anybody. The scale of corruption we're seeing as this unfolds is simply outrageous and cannot be tolerated."

Cammarano, a former city councilman at large in Hoboken, was elected mayor in June and inaugurated July 1. He pledged to "lower taxes, reform government and deliver real change for Hoboken," according to his campaign Web site.

The FBI began the large operation three years ago. The public corruption and money-laundering probes were separate but linked by common players, a source close to the investigation said.

The other investigation centered on a group of rabbis who allegedly laundered tens of millions of dollars through their religious organizations for a fee, according to the source.

According to Newark's The Star-Ledger, the rabbis taken into custody are from the Syrian Jewish communities of Deal on New Jersey's northern shore and in Brooklyn, New York.

One complaint said that Van Pelt, the state legislator, bristled when photographed with an undercover agent at a restaurant in Atlantic City, New Jersey.

"We don't want to get our picture taken," the complaint quotes the lawmaker as saying.

All About New Jersey • Hoboken