(CNN) -- Forty years ago, a group of young people led by a charismatic, 5-foot-2-inch ex-con named Charles Manson set out on a murderous spree in Los Angeles, California. They planned to spark an apocalyptic race war that Manson called "Helter Skelter," after a song by the Beatles. 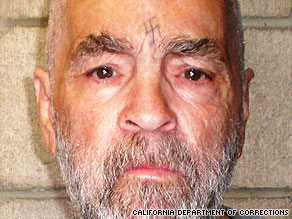 Over two nights in August 1969, the killers took the lives of seven people, inflicting 169 stab wounds and seven .22-caliber gunshot wounds. They used the blood of their victims to scrawl anti-establishment messages on the walls: "Pig," "Death to Pigs," "Rise" and a misspelled "Healter Skelter."

"The murders were probably the most bizarre and far-out in the recorded annals of American time," said Vincent Bugliosi, who prosecuted Manson and members of his "Family" and later wrote the best-selling book "Helter Skelter." "People are fascinated by the strange and the bizarre."

Crimes linger in our memories when they are especially horrific or when they represent the era in which they occur. The Manson murders did both. And they grew to symbolize the dark side of the California dream, as well as the political, social and cultural turbulence of the 1960s.

Listen to the music of the Manson murders »

Laurie Levenson, a professor at Loyola Law School who follows high-profile cases, described Manson as the worst of the worst, evil incarnate.

"It was the dark side of paradise," Morrison said. "People could shake their fingers and say, 'This is where your high-living, rich, hippie, movie-star lifestyle gets you. This is where the drug culture gets you.' It's the boomerang effect, the wages of sin."

Tate was married to director Roman Polanski and eight months pregnant. She begged in vain for her life, saying she wanted to live to have her baby, according to Bugliosi.

The next night, grocer Leno LaBianca, 44, and his wife, Rosemary, 38, were butchered in their home in the wealthy Los Feliz neighborhood. Rosemary LaBianca was stabbed 41 times. A fork jutted from Leno LaBianca's abdomen, where one of his killers had carved the word "war."

When arrests came and the identities of the killers became known, the case grew even more frightening, Bugliosi said.

"They could have been the kid next door," Bugliosi said. "Tex Watson was a straight-A student, a track star. Patricia Krenwinkel wanted to be a nun and sang in a church choir. Leslie Van Houten was homecoming princess at Monrovia High School."

They were in thrall of Manson, who told them he was Jesus Christ -- and the devil, rolled into one.

Manson's "Helter Skelter" race war and revolution never came. He and Susan Atkins, Watson, Krenwinkel and Van Houten are serving life terms for their roles in the murders. Atkins, who is said to be dying of brain cancer, has a parole hearing next month.

With their brew of violence, music and anti-establishment youth counterculture, the murders and ensuing trials established Manson as a perverse cultural icon that endures to this day. Along the way, the mastermind transcended his victims, and the Tate-LaBianca murders became known as the Manson murders.

Charlie Manson's image can still be found on posters and T-shirts. In 1998, the animated television series "South Park" featured Manson in a Christmas special. There have been books, a play, an opera and television movies about the case. There are even iPhone applications of Manson's famous quotes.

Learn more about the music that was influenced by Manson »

"Manson is like a Rorschach test," said Robert Thompson, a Syracuse University professor who teaches popular culture. "How you interpret his place in popular culture depends on your own place in the culture."

Before the Manson murders, no one thought hippies were capable of violence. The Manson Family was "looking and living like typical hippies," Bugliosi said, "but they were mass murderers. That was their religion, their credo. They wanted to kill as many people as they could. That shocked the nation, and that hurt the countercultural movement."

Manson's musical roots partially explain his staying power. A folk singer, he wanted to break into the music industry and recorded some songs with one of the Beach Boys. Manson's own music has continued to influence other performers, like Guns N' Roses and Marilyn Manson.

Manson believed that the Beatles were speaking to him through the lyrics of the White Album, which was released in late 1968. The apocalyptic message, as Manson interpreted it: Blacks would "rise up" and overthrow the white establishment in a race war. Manson and his Family would be spared by hiding out in a "bottomless pit" near Death Valley until he could emerge to assume leadership of the post-revolutionary order.

Manson's crimes continue to evoke a strong reaction long after public obsession over other high-profile cases has faded. He was the bogeyman under the bed, the personification of evil, the freaky one-man horror show. For years, when prison officials still allowed it, he gave television interviews, never failing to shock. The interviews kept memories of him fresh long after he was locked up.

"You got a pistol on you?" he asked Tom Snyder during a televised 1981 prison interview. "Well, I just thought you might not like what I have done and want to do something about it."

Seven years later, he was far more volatile during a televised conversation with Geraldo Rivera: "I'm gonna kill you, as many as I can. I'm gonna pile you up to the sky, I figure about 50 million ..."

What sets Manson apart from other infamous killers is that he never killed anyone himself, Levenson said. Instead, he convinced others, mostly women, to kill for him. His powers of persuasion didn't stop there.

During his 1970 trial, Manson carved an X in his forehead, saying, "I have Xed myself from your world." His codefendants and sidewalk followers soon did the same. When Manson was convicted, he and his codefendants shaved their heads.

"It's mind warp. That was really scary," Levenson said. "It wasn't just that people were spouting beliefs for him; they were cutting crosses in their heads.

"I think Manson will haunt us forever."

All About Charles Manson • Vincent Bugliosi • The Beatles • The Beach Boys