BRYCEVILLE, Florida (CNN) -- Michael Ratley was known as a hero. 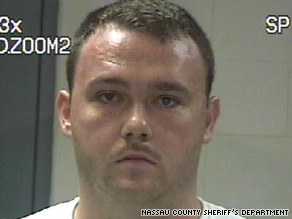 Michael Ratley will spend the rest of his life in jail, without parole, for killing his wife with a hammer.

In December 2006, Ratley carried his 2-week-old son, Aiden, and his wife, Effie Ratley, 29, from the flames as fire engulfed their Bryceville, Florida, trailer.

Days after the fire, a teary-eyed Ratley told local media that love drove him to save their lives. "I might have lost everything physical, but I've still got my two most precious things," Michael Ratley told CNN affiliate WJXT-TV at the time.

A month later, Effie Ratley was dead, bludgeoned with a hammer in a bedroom of her in-laws' home, not far from the trailer's ashes on a dirt road marked only with a black arrow on a wooden sign.

The man who was hailed as a hero for saving his wife was convicted in July of murdering her.

On Tuesday, a Nassau County Court jury in Yulee, Florida, said he should spend the rest of his life in prison for the crime. Circuit Judge Robert Foster sentenced the 25-year-old to life without possibility of parole.

What changed a heroic husband into a hammer-wielding wife killer?

Hero gets life for murder »

During the trial, no motive was offered.

On January 27, 2007, with his parents downstairs watching TV with the door shut and his infant son in the other room, prosecutors said, Ratley put on a pair of thick black gloves, grabbed a heavy-duty hammer and went into the bedroom where his wife was lying down after taking some medication. He lifted the hammer and "savagely and brutally beat her on the head over and over" -- at least seven times, said Assistant State Attorney Bernie de la Rionda.

During the trial, Ratley said he had nothing to do with the slaying. His defense lawyers argued that an intruder, who Ratley alleged attacked him in the barn the night before, was the culprit. But prosecutors said that was part of Ratley's plan, setting up for a scenario in which an intruder killed his wife by cutting the wire on their window.

Testifying on Tuesday, his friends and family spoke of him as a church-going, gentle man who always went out of his way to help others -- the elderly at a nursing home, a neighbor whose husband was slain and sick family members.

"He has always been a caring, nonviolent person," said his mother, Cindy Ratley. "He'd give you the shirt off his back." Cindy Ratley said it had been her dream to have her close-knit family living together on her secluded 20 acres.

Witnesses for Ratley tried in court to give a picture of the son, grandson, and friend they said he had always been, with the defense calling the murder a "single, horrible snapshot" in Ratley's overwhelmingly positive life. They urged the jury to give Ratley's son a chance to know his father, one who cares and loves deeply for him, they said.

As his mother and others left the witness stand in the packed and divided courtroom, they each told Ratley they stood behind him and loved him. As they walked back to sit down, many mouthed, "I love you."

The prosecutors argued Ratley's character couldn't be clearer, based on his actions. "Unfortunately, the best example we have of his character is in what he did. This shows his best character," de la Rionda said, showing the jurors gruesome photos of Effie Ratley's injuries.

De la Rionda disputed the description of Ratley as a wonderful father. "This loving father had no problem whatsoever -- a short distance from his son -- exterminating the life of his son's mother," he said.

Michael Ratley met Effie Williams when she was having car trouble. He offered to buy a new tire for her and change it.

Effie Ratley, who enjoyed listening to '50s music and watching black-and-white movies, was thrilled when she and her husband had their baby, her family told the court Tuesday.

"Her son was her pride and joy," said her stepmother, Joy Williams, wearing a purple and pink "Justice for Effie" bracelet. "But she never knew more than six weeks of her motherhood dreams."

By all accounts, the Ratleys' relationship had its rocky points. They were married, separated and remarried.

Michael Ratley's family said that the first time the couple got married, they were worried he wasn't mature enough, that he needed to grow up, and they said the couple definitely had growing pains.

"He didn't know if he could love her enough, because he only wanted the best for her," Donna Stanley said, talking about her nephew.

Effie Ratley's father, Duane Williams, cried on the stand Tuesday as he talked about his only daughter. His voice quivered as he tried to explain how he feels her loss each day.

"She's the first thing I think about in the morning when I wake up," he said, his voice wavering. "And the last thing before I go to bed."

Neither Effie or Michael Ratley's families wanted to speak about the sentencing after the hearing, but de la Rionda said Effie's family was pleased with the result.

"They were always hoping for [the] death [penalty], but they're happy he's going to get life and he's not going to be able to get out," de le Rionda said. "He's going to die in prison."

While the announcement of the sentence, which spared him from death, was greeted with a pronounced "Yes!" from Michael Ratley's family inside court, the gravity of the situation seemed to hit during a short recess. His grandmother began sobbing. Family members comforted her until Cindy Ratley sat down next to her. The two cried and embraced for a couple of minutes. Michael Ratley looked over, saw his grandmother upset, and he, too, began to cry.

All About Murder and Homicide • Florida