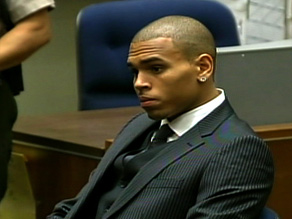 Chris Brown received an expected sentence on Tuesday of probation and community service.

Also Tuesday, CNN obtained a probation report for Brown that says the pair were involved in at least two other domestic violence incidents before the February attack for which Brown was sentenced.

The probation report, which CNN obtained after Brown's sentencing, was used to reach his plea agreement.

Brown, 20, was arrested after an early morning argument inside a rented Lamborghini on a Hollywood street on February 8.

Watch Brown get sentenced to probation »

The sentencing was delayed earlier this month because documents detailing Brown's proposed community service plan in Virginia, where he maintains a legal residence and wants to serve his sentence, had not arrived in time for Schnegg to review.

Brown's probation will be overseen by the state of California, the judge said.

Brown must also complete domestic violence counseling. Schnegg also put a restraining order in place, requiring Brown to stay 50 yards away from Rihanna, 10 yards if the two are at the same industry event. The judge issued a strict warning to Brown not to violate the order, which remains in place until 2014.

Rihanna's attorney, Donald Etra, would not say whether she wanted the restraining order lifted, but if Rihanna wants the order modified she must personally appear in court to request it, Etra said.

Rihanna, whose real name is Robyn Rihanna Fenty, did not attend Tuesday's sentencing.

According to Brown's probation report, the February argument began over an incident at a Beverly Hills party. An earlier, sworn statement by Los Angeles Police detective DeShon Andrews said the incident began when Rihanna found a text message on his cell phone from "a woman who Brown had a previous sexual relationship with."

The pair argued while in a sports car driven by Brown, the police statement said. It went on to describe the assault in great detail, saying Brown punched Rihanna -- identified in the statement as Robyn F. -- numerous times and put her in a head lock, restricting her breathing and causing her to start to lose consciousness. He threatened to beat her and kill her, according to the statement, and he bit her ear and her fingers.

Brown made a public apology last month in a video statement posted on his personal Web site.

"I have told Rihanna countless times, and I'm telling you today, that I'm truly, truly sorry in that I wasn't able to handle the situation both differently and better," Brown said.