NEW HAVEN, Connecticut (CNN) -- A Yale University lab technician was arrested Thursday and charged with murder in the slaying of a graduate student whose body was found in the basement wall of an off-campus medical research building, police said. 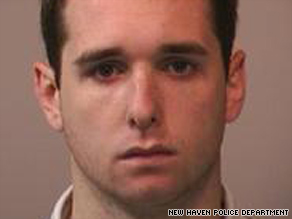 Raymond Clark, 24, was arrested and charged with murder, police said. His bond was set at $3 million.

Raymond Clark was apprehended about 8:10 a.m. ET at a Super 8 motel in Cromwell, Connecticut, where he had spent the night after being released Wednesday following his submission to DNA testing.

Hours after his arrest, Clark appeared in court and did not enter a plea. Standing with chains on his ankles and his palms on a table, he looked only at the judge and spoke only to acknowledge that his rights were read to him.

A court date of October 6 was set.

Lewis described the killing as an instance of "workplace violence" but did not elaborate.

Annie Le's body was found in the basement wall of an off-campus medical research building Sunday. She had been strangled.

Le, 24, a pharmacology student, was last seen alive September 8, the day she appeared in a surveillance video entering a four-story lab at 10 Amistad St., about 10 blocks from the main campus.

Her body was found on what was to have been her wedding day.

The latest on the investigation into Annie Le's slaying on HLN's "Nancy Grace."
Tonight, 8 ET

He could not release details about the charges or whether DNA results led police to arrest Clark, who initially was described as a person of interest in the case.

"This arrest warrant has been sealed, so no further information can be released in order to comply with this court order," Lewis said.

Clark could have been arrested Wednesday if he had declined to provide DNA samples and allow police to search his home, but he was released after complying, New Haven city spokeswoman Jessica Mayorga said. Police had been monitoring the motel where Clark was staying.

When asked about the arrest, Clark's attorney David Dworski referred CNN to the statement he released earlier: "We are committed to proceeding appropriately with the authorities with whom we are in regular contact."

Two other search warrants also were executed Wednesday -- one on property belonging to Clark that was not named in the first warrant and a second for Clark's vehicle, which was being processed Wednesday evening, Lewis said earlier.

He said Clark is a technician who does "custodial-type" work at the building. Clark answered police questions for a while but later retained an attorney and stopped, Lewis said.

Yale President Richard Levin said while the school's administration is "relieved" by the news of Clark's arrest, "we must resist the temptation to rush to judgment."

Clark, a lab technician at Yale since December 2004, had nothing in his employment history that "gave an indication that his involvement in such a crime might be possible," Levin said in a statement Thursday.

Lewis said Clark and Le worked in the same building and passed in the hallway, but he refused to comment further on whether they knew each other.

Investigators have collected about 250 pieces of evidence, Lewis said.

Lewis earlier said police had reviewed about 700 hours of video and interviewed more than 150 people, some more than once.

Watch a timeline leading up to Le's death »

Authorities have not released information on what DNA evidence may have been found, although investigators said earlier that bloody clothing was found hidden above tiles in a drop ceiling in another part of the building.

Police have not described the clothes that were found, nor said to whom they might have belonged. Teams of investigators at a Connecticut State Police lab worked through the weekend processing and examining the bloodstained garments.

But Thomas Kaplan, editor in chief of the Yale Daily News, said a Yale police official told the college paper that the clothes were not what Le was wearing when she entered the building.

Lewis said Wednesday that processing of the building was nearing completion and police would probably clear it Thursday morning.

Le was to have been married Sunday on New York's Long Island to Jonathan Widawsky, a Columbia University graduate student.

Le was from Placerville, California, and seemed to have been aware of the risks of crime in a university town. In February, she compared crime and safety at Yale with other Ivy League schools for a piece for B magazine, published by the medical school.

Among the tips she offered: Keep a minimum amount on your person. When she walked over to the research building last week, she left her purse, credit cards and cell phone in her office.