(CNN) -- Susan Denise Atkins, a former member of the Manson family who killed pregnant actress Sharon Tate during a two-day killing spree in 1969, has died, according to a California corrections spokesman. She was 61. 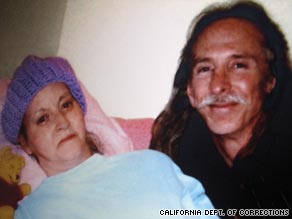 Atkins, California's longest-serving female inmate, was suffering from terminal brain cancer. Since she entered prison in 1971, she became a born-again Christian who worked to help at-risk youth, victims of violent crimes and homeless children, among others, according to a Web site maintained by her attorney and husband, James Whitehouse.

But Atkins was best known for her actions in 1969 when as a 21-year-old she and other Manson family members participated in seven murders over two days, a rampage that terrorized Los Angeles.

By her own admission, Atkins held Tate, who was the eight months' pregnant, down as the 26-year-old actress pleaded for mercy, stabbing her 16 times. In a 1993 parole board hearing, Atkins said Tate "asked me to let her baby live. ... I told her I didn't have any mercy on her."

After stabbing Tate to death, Atkins -- known in the family as Sadie Mae Glutz -- scrawled the word "pig" in blood on the door of the home Tate shared with her husband, director Roman Polanski, according to historical accounts of the murders.

Polanski was not home at the time, but three of Tate's houseguests -- Abigail Folger, Jay Sebring and Voytek Frykowski -- were killed. Also slain was teenager Steven Parent, who was visiting the home's caretaker in his cottage out back.

All of those involved -- Manson, Atkins, Leslie Van Houten, Patricia Krenwinkel and Charles "Tex" Watson -- were convicted in connection with the five deaths that night and the killings of Leno and Rosemary LaBianca the following night. Atkins also was convicted in the earlier murder of music teacher Gary Hinman.

They were all sentenced to death. But their sentences were automatically commuted to life in prison when the U.S. Supreme Court struck down the nation's death penalty laws in 1972.

Atkins' brain cancer was diagnosed in March 2008, Whitehouse wrote on his Web site. On May 15, 2008, doctors predicted she would live less than six months. But she passed that deadline, he wrote, and celebrated her 21st wedding anniversary on December 7.

In July 2008, Atkins requested a "compassionate release" from the California Board of Parole Hearings. It was denied by unanimous decision. Her request was opposed by Tate's sister, Debra, Los Angeles County prosecutors and California Gov. Arnold Schwarzenegger, among others.

On September 2, a panel from the Board of Parole Hearings denied Atkins' suitability for parole in a hearing, her 13th. Atkins' hospital bed was wheeled into the hearing room for the proceeding, and she appeared to sleep through much of it. For her statement, her husband helped her deliver the 23rd Psalm. She spoke in a high, cracked voice.

During the roughly six-hour-long hearing, Debra Tate asked the board commissioners not to free Atkins.

"There has never been any hate in my heart for these people," she said. "I am incapable of hating. I commend them -- always have commended them -- for their good deeds that they have managed to accomplish within the walls of confinement. However, I do believe that the death of my sister, my nephew -- which would be turning 40 years old right now, this week -- is not an irrelevant cause."

Atkins was described as a model prisoner who accepted responsibility for her crime, but Tate said Atkins had never offered her an apology.

Sebring's nephew, Anthony DiMaria, also spoke at the parole suitability hearing. "I feel genuine compassion for Ms. Atkins as she deals with this disease," he told parole commissioners, "but in no way should an illness dealt by fate mitigate punishment for crimes of this magnitude."

Atkins was housed in the California Institution for Women at Frontera until May 2008 when her declining health prompted a move to Central California Women's Facility. On his Web site, Whitehouse wrote that as of spring 2009, Atkins was paralyzed over 85 percent of her body and could not sit up in bed or even be moved into a wheelchair.

Like most of the other former Manson family members, Atkins shunned Manson during her incarceration. "He is a liar, a con artist, a physical abuser of women and children, a psychological and emotional abuser of human beings, a thief, a dope pusher, a kidnaper, a child stealer, a pimp, a rapist and a child molester," she wrote in a manuscript posted on her Web site.

Atkins gave birth to a son while living at Spahn Ranch, an old movie set, with other members of the Manson family. While she was on death row, she wrote, he was legally taken from her because no one in her family was willing to raise him.

"His name and identity have been changed and sealed, so I have no idea where he is or how he is doing," she wrote. "I have since been told his name was changed to Paul, and whether or not that is true I like it. ... My continuing separation from my son, even after all these years, remains an incredibly poignant and enduring loss."

All About Sharon Tate • Charles Manson • Murder and Homicide