(CNN) -- The events of a single afternoon when she was 13 years old have haunted Samantha Geimer her entire life. A famous movie director allegedly gave her champagne and had sex with her. 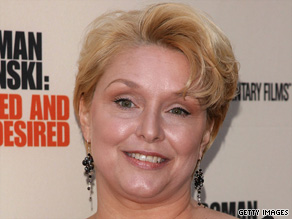 She is 45 now, and wishes the whole matter would just go away. The arrest of Roman Polanski in Switzerland over the weekend makes that highly unlikely. Geimer is back in the news in connection with the infamous 1977 California sex case, whether she likes it or not.

It should have ended three decades ago, when Polanski pleaded guilty to a single count of unlawful sexual intercourse with a minor. He would have been given credit for time served while undergoing an evaluation and placed on probation.

But Polanski fled the country before sentencing, fearing the judge would back out of the plea bargain and sentence him to prison.

Polanski has filed an appeal against his extradition, Swiss authorities said. They said they would act on the case within weeks.

Geimer, who lives in Hawaii with her husband and three children, will not be commenting until Polanski's legal situation in Switzerland is clarified, her lawyer told CNN. But in past interviews she made it clear that a plea bargain intended to spare her pain as a teenager continues to cause her grief as an adult.

Once an aspiring actress, Geimer has said she long ago got over what Polanski did to her. She sued him, and a settlement was reached out of court. But the media, prosecutors and the courts in Los Angeles, California, continue to torment her, she has said.

Watch what Geimer said in a HBO documentary »

Every time the case resurfaces her wounds reopen.

She most recently spoke in January, as attempts to resolve the case once again failed. She filed court papers asking a Los Angeles judge to dismiss the charges against the Oscar-winning director.

Negotiations ended when the judge insisted that Polanski come to court for a hearing. Prosecutors said he would be subject to arrest on the fugitive warrant the minute he stepped off the plane. He stayed away.

"Every time this case is brought to the attention of the court, great focus is made of me, my family, my mother and others," Geimer wrote in her affidavit to the court. "That attention is not pleasant to experience and is not worth maintaining over some irrelevant legal nicety, the continuation of the case."

Geimer was particularly upset when prosecutors filed a fresh version of the entire 1977 grand jury transcript, replete with all the lurid details. "True as they may be, the continued publication of those details cause harm to me," she wrote in January. "I have become a victim of the actions of the district attorney."

"This is an issue between Mr. Polanski and the court," said Sandi Gibbons, spokeswoman for the district attorney's office. "All I can say is that the warrant for Mr. Polanski's arrest was issued by the Superior Court of Los Angeles in 1978 because Polanski fled the jurisdiction. The court issued a warrant for his arrest that is valid to this day." Watch what's next for Polanski

The case began March 10, 1977, when the girl, then known as Samantha Gailey, agreed to be photographed by Polanski, according to court records. He told her mother he was on assignment for French Vogue.

They spent the afternoon shooting and, as the light began to fade, made their way to the hot tub at actor Jack Nicholson's house on Mulholland Drive. There, she told investigators, Polanski gave her champagne and part of a Quaalude and had sex with her.

She said she felt disoriented and disgusted by his overtures and repeatedly told him "no." She faked an asthma attack and begged him to take her home. She said she cried in his car afterward.

She spoke with People magazine in 1997. After her mother went to police, "all hell broke loose," Geimer said. The European media compared her to Lolita, the young seductress in fiction.

"The fallout was worse than what had happened that night," she told People. "It was on the evening news every night. Reporters and photographers came to my school and put my picture in a European tabloid with the caption Little Lolita. They were all saying, 'Poor Roman Polanski, entrapped by a 13-year-old temptress.' I had a good friend who came from a good Catholic family, and her father wouldn't let her come to my house anymore."

Against that backdrop, the plea deal was struck.

Afterward, Geimer shut down emotionally and rebelled, she told People on the 20th anniversary of the crime.

"I was this sweet 13-year-old girl, and then all of a sudden I turned into this pissed-off 14-year-old,' Geimer said. I was mad at my attorney; I was mad at my mom. I never blamed her for what happened, but I was mad that she had called the police and that we had to go through this ordeal. Now I realize she went through hell trying to handle things as best she could."

Geimer dropped out of school, got pregnant at 18 and married at 19. She divorced and moved with her family to Hawaii. She later married a carpenter, with whom she had two more children.

In 2003, when Polanski was up for an Oscar for the Holocaust drama "The Pianist," Geimer broke her silence again, saying he should be able to attend the Academy Awards ceremony.

She spoke to CNN's Larry King and wrote an opinion piece for the Los Angeles Times urging people to "judge the movie, not the man."

She told King she feels nothing for Polanski. "He's just a stranger to me. I met him twice, three times. ... His life really has nothing to do with my life."

She said she was happy when he left the country because his departure eased the intense public scrutiny.

"Looking back, there can be no question that he did something awful. It was a terrible thing to do to a young girl," she wrote in her Los Angeles Times piece. "And honestly, the publicity surrounding it was so traumatic that what he did to me seemed to pale in comparison."

She continued,"People don't understand that the judge went back on his word. They don't know how unfairly we were all treated by the press. Talk about feeling violated! The media made that year a living hell and I've been trying to put it behind me ever since."

She concluded: "The one thing that bothers me is that what happened to me in 1977 happens to girls every day, yet people are interested in me because Mr. Polanski is a celebrity."

She added that other young victims need that attention more than she does.

All About Roman Polanski • Sexual Offenses • Criminal Sentencing and Punishment