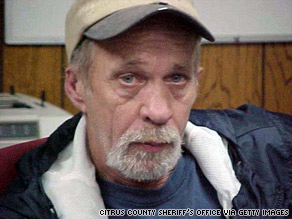 John Couey had been sentenced to death for killing 9-year-old Jessica Lunsford in Florida in 2005.

John Evander Couey, 51, died at 11:15 a.m. ET of natural causes, a Florida Department of Corrections spokeswoman told CNN. He had been taken to a Jacksonville, Florida, hospital from Florida State Prison in Starke, Florida.

Because of privacy laws, no further information could be released by the Department of Corrections.

A source close to the case told CNN that Couey's death was not unexpected and he had been ill for some time.

"I never dreamed it would happen like this," Jessica's father, Mark Lunsford, told CNN. He said he never thought he would live long enough to see Couey put to death because of the lengthy appeals process.

He said he was sad when he heard the news of Couey's death. "To me, death is sad," he said. "But her death, Jessie's death, has been redeemed ... I'm relieved. I'm glad it's over with."

Couey was sentenced to die in August 2007 for abducting and raping Lunsford, then killing her by burying her alive. The girl was snatched from her bed in her family's Homosassa, Florida, home the evening of February 23, 2005, by Couey, a registered sex offender. Her body was found three weeks later, buried at the home of Couey's half-sister, who lived within sight of the Lunsford home.

The girl's body was wrapped in plastic garbage bags, and her hands were bound with speaker wire. She was clutching a stuffed dolphin -- a toy won for her at a state fair by her father, and which Couey allowed her to bring with her when she was abducted.

"I am not shedding any tears," the girl's grandmother, Ruth Lunsford, said on Wednesday. "I don't feel sorry for him. I think God said, 'John Couey, it's time to go.' "

"I don't feel sorry for him that he had to suffer," she said. "He didn't have any mercy on my granddaughter when he murdered her. I'm glad we didn't have to wait years and years for his appeals and execution, and the taxpayers no longer have to pay for him. I'm glad that God took a hand in it."

Citrus County Sheriff Jeff Dawsy, who led the investigation into the girl's death, told reporters he wished Couey could have faced the death sentence handed down by the jury.

"I know he didn't suffer the way Jessie did when he killed her," Dawsy said. "I'm sorry I won't get to look him in the eyes as he died, but I'm relieved to know he'll never hurt another child again."

Authorities believe Lunsford was kept for several days before she was killed. Her blood was found on a mattress in the home where Couey was living, her fingerprints also were discovered at the location. During the search for the girl, as authorities and hundreds of volunteers combed Citrus County, north of Tampa, police twice visited that home.

"Couey's timeline after he kidnapped Jessica Lunsford leaves open the possibility that she was alive, and in the house, at the time of the first and possibly the second interview," according to a prosecution memo in the case.

In sentencing Couey, Judge Ric Howard noted Couey became fearful of police dogs being used in the area in the search for the girl. He told Lunsford he was planning to take her home, but did not want her to be seen, and so persuaded her to get into a trash bag. He then knotted another trash bag over her head, placed her in a hole and shoveled dirt on top of her.

Jurors convicted Couey of first-degree murder, kidnapping and sexual battery on a child under 12 in March 2007.

Howard, at Couey's sentencing, brought many in the courtroom to tears as he discussed how the girl died slowly as her oxygen ran out. A medical examiner testified she could have been alive as much as five minutes, or even longer, before she lost consciousness, Howard said.

"He caused a slow, suffering, conscious death," Howard said of Couey. "Her only source of comfort during this horrific experience was her purple dolphin." Another horrific detail the judge noted: The girl was able to poke several fingers through the innermost trash bag covering her before she died.

The judge also noted that Couey made "crude, vulgar and repulsive" comments to police after his arrest regarding his sexual assault of the girl, and the judge quoted Couey as saying the media was blowing the case out of proportion -- "This kind of thing happens every day."

Although Lunsford's death was one of several that contributed to the passage of a federal child-protection law dealing with sex offender registration and other matters related to child sex offenses, Mark Lunsford said at the time of Couey's sentencing the law does not go far enough.

On Wednesday, Mark Lunsford told CNN he is a Christian and he believes he will see his daughter again.

In a jailhouse phone call before his sentencing, Couey told a woman described as his aunt he expected the death penalty.

"I kick myself in the butt a hundred times a day," he said. "Stupidity ... Just trying to figure out, I'm just asking myself, 'Why was you so stupid?' "

"Well, none of us are perfect," the woman said, "and the drugs didn't help any."

Speaking after Couey's sentencing, Mark Lunsford referenced Couey's earlier comments in which he said that when he got to heaven, he would apologize to his victim.

"I have bad news," Mark Lunsford said. "I don't think you're going to make it there." He called on Couey to drop his appeals. "You want to do something for her, give your life for the one you took."

CNN's Rich Phillips and Susan Candiotti contributed to this report.

All About John Couey • Florida • Murder and Homicide