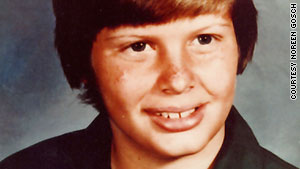 New York (CNN) -- When the Sunday edition of the Des Moines Register came off the presses on September 5, 1982, the front page headlines included: "USDA Focus Shifts Back to Farmers"; "Video Recorders Let Viewers 'Beat the Clock,' Spark TV Boom"; and "China Offers Accord with Soviet Union."

Little did the newspaper's editors realize that one of the biggest stories in Iowa's history was about to unfold and that the central figure would be a 12-year-old Register paperboy named Johnny Gosch.

Gosch, on the job just over a year, vanished while on his paper route.

His mother, Noreen Gosch, says Johnny never delivered a late paper, and had a perfect service award from the Register. He used part of his earnings to buy a motor dirt bike.

He set out at 5:45 a.m., reportedly with his dachshund, on daily rounds. But suspicion arose two hours later when one of Johnny's customers called his parents to say the paper had not been delivered.

Leonard John Gosch, Johnny's father, told his wife to call police, and went looking for the boy. He soon found Johnny's red wagon, just two blocks from their West Des Moines home. It was full of newspapers and, according to the police report, the father delivered them.

The dog came home on its own, investigators say. Johnny never did.

According to the initial police report, witnesses said they had seen Johnny talking to a man in a car described as a blue Ford Fairmont, apparently giving directions.

The car made a U-turn and approached another newspaper carrier and asked another carrier for directions.

It is not clear what happened next.

Noreen Gosch's private investigators found witnesses who say they saw Gosch being pulled into the car. Gosch and her investigators say Johnny, was forced into a pedophile prostitution ring, an assertion that is frequently met with skepticism by authorities.

"We have no evidence to suggest that Johnny was swept into a pedophile ring,'' said Lt. Cameron Coppess of the West Des Moines Police Department. "It is not an impossible theory, but one that we have not been able to support through facts.''

To this day there have been no major suspects or arrests.

We have no evidence to suggest Johnny was swept into a pedophile ring.
--Lt. Cameron Coppess

"There have been multiple names of people put forward to us that were suspected of being involved in the disappearance,'' Coppess said. "But there's not been one substantial piece of evidence that has tied any of those individuals to the disappearance of Johnny Gosch.''

The Gosch case has become a landmark for its tragic storyline and the changes it brought to the way law enforcement, communities and the media handle child abductions and missing persons cases.

Johnny Gosch was one of the first children featured on milk cartons and, after the 1984 disappearance of another Iowa delivery boy, Eugene Martin, many newspapers began the eventual shift to adult carriers.

Investigators say they may never know whether the Gosch and Martin cases are connected.

Gosch case files and documents fill seven drawers at the West Des Moines Police Department. Over the years the case has taken twists and turns that make it a continuing subject of speculation on the Internet.

A Google search of the name Johnny Gosch brings up more than 200,000 results, including the Web site for The Johnny Gosch Foundation.

Noreen Gosch has been a tireless crusader for nearly three decades and her book, "Why Johnny Can't Come Home,'' was released in 2000. She holds tightly to fond memories of her son. "Johnny was the kindest, most gentle kid," she said, telling a story about how he rescued a neighbor's son from bullies.

Johnny was the kindest, most gentle kid.
--Noreen Gosch

Noreen Gosch says her son visited her at home for a few hours at around 2:30 a.m. in March 1997. She said Johnny, then age 27, told her how he had been kidnapped and thrown into a life of child prostitution. When asked why he did not stay longer, Gosch says Johnny told her he was still in danger and needed to leave Des Moines.

Gosch said has not seen or heard from him again.

Two years later, a witness in an embezzlement case testified that he took part in Johnny's abduction, and said he had also previously been forced into a child sex ring.

Coppess said police investigated, speaking with the man's family before determining that he was in Omaha, Nebraska, when Johnny Gosch disappeared.

In 2006, photos of several bound and gagged boys were dropped off on Noreen Gosch's doorstep and copies were sent over the Internet to other people connected with the case.

Gosch says her son was in the photos. Police disagree.

Gosch said police made critical mistakes in the first hours of the investigation. The police chief at the time, Orval Cooney, stepped onto a park table with a bullhorn and told a group of searchers to stop looking for the boy because he was just a runaway, she charged.

Cooney is deceased and Coppess could not verify the bullhorn incident. "This police department learned a lot from this case, as have many police departments across the country as far as investigating the disappearance of youth,'' he said.

Johnny Gosch is still officially considered a missing person by police, and his disappearance remains an open case. But there are no new leads or information to actively pursue, Coppess said. About five leads come in every year, he said.

If you have information about the Gosch case, call the West Des Moines Police Department at (515) 222-3345 or the National Center for Missing and Exploited Children at 1-800-THE LOST.