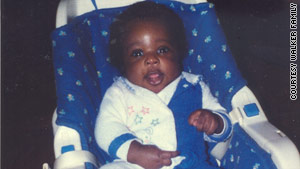 (CNN) -- When Rosa Glover brought her 19-month-old son to a New York City playground in 1989, she had no idea tragedy was about to strike a second time in the same place.

In May 1989, 2-year-old Christopher Dansby disappeared from his grandmother's sight on that playground.

As an intense search for both children generated media and public interest across the city, the New York Police Department pointed out other eerie similarities in the cases:

Moments before they went missing, the boys were playing with the same children -- a 10-year-old girl and her 5-year-old brother, according to news reports.

In addition, Walker and Dansby lived in the same apartment building in a nearby housing project in Manhattan's Harlem neighborhood.

"That's a hell of a coincidence,'' says Ron Jones, a senior case manager with the National Center for Missing and Exploited Children, a nationwide clearinghouse and advocacy group.

Jones, assigned to the Walker and Dansby cases from the start, says leads still come into his office fairly often and he relays them to the New York City police.

"People who think they might have seen Shane call us up with a tip,'' he says. "They might be going with the age-enhanced photo.''

According to his mother, Shane was sitting on a bench with her and eating potato chips when the children approached and asked if he could play.

While the three children played near the slide, Glover says, a man sat near her and started talking about crime, about how things happen to children. He even mentioned kidnapping. He showed Glover scars he said he had gotten in fights.

"I turned my head to look at all the scars on his body," she says. "When I turned back, I didn't see my son.''

The children Shane was playing with were not around, either. "I started walking around the park, hollering and screaming.''

The next thing Glover remembers is seeing the same two children re-enter the park through a hole in a wire fence.

"I said, 'Where's my son?' " The boy and girl said they left him in the park. Glover took the children to the police station. They were let go after extensive questioning.

Police searched and questioned Glover and her relatives. "They thought maybe a family member took him out of the park,'' Glover said, adding that police also interviewed the man with the scars and released him.

Like Shane Walker, Christopher Dansby has never been found.

The Walker case is still active, according to Detective Cheryl Crispin, a New York Police Department spokesperson. The NYPD declined repeated requests for an interview or more details.

One lead in the days after Shane's disappearance was especially unnerving. Glover says she received a phone call saying her son was buried in an abandoned building. Police investigated and found nothing. To this day, Glover, 57, believes Shane, her only child, is alive. He would be 21.

"I just hope and pray that one day I see him,'' she says, speculating that by now he might have kids of his own.

"I would give him a hug and kiss and we'd go somewhere -- to Florida, anywhere -- just to get away, just to be with him.''

Glover and Shane's father still live in the neighborhood but left the apartment building years ago. Glover avoids walking past the playground.

"Every time I come in the area I start crying and feel depressed,'' she says. Police initially speculated, she says, that Shane might have been kidnapped and sold on the black market.

Some years ago, Glover appeared on "The Montel Williams Show," where a psychic told her Shane was being raised by a wealthy family. Glover brought a photograph of Shane and some of his toys to the show so the psychic could touch them. She said he ''was well taken care of and he was learning the piano,'' Glover recalls.

Though her time with him was short, Glover is comforted by memories of her young son. "He smiled all the time. He only laughed when tickled. ''He liked teddy bears and monkeys."

For a short time, Shane and his parents had a pet chimpanzee named James. The toddler enjoyed sticking bananas in the cage for James to eat.

Glover also recalls a trip they took to Disney World in Florida shortly before Shane went missing. He loved the rides, she says, but was afraid of Mickey Mouse. "He would just holler and scream. I had to carry him all around the park.''

Shane's recollections of her might be dim because he was so young when he disappeared, she says. Still, when she became ill a few years ago, Glover felt driven to hang on.

"I was praying that I survive so I could see him when they find him.''