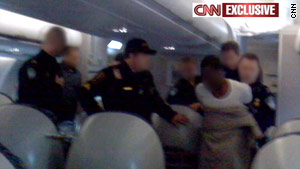 Officers take suspect into custody in Detroit, Michigan, after an attempt to destroy a Northwest Airlines flight.

(CNN) -- The father of a man suspected in a botched terror attack aboard a Northwest Airlines flight contacted the U.S. Embassy in Nigeria recently with concerns his son was planning something, a senior U.S. administration official said Saturday.

The father -- identified by a family source as Umaru Abdul Mutallab -- contacted the U.S. Embassy "a few weeks ago" saying his son, Umar Farouk Abdulmutallab, had "become radicalized," the senior administration official, who is familiar with the case, told CNN.

Abdulmutallab, 23, was charged in a federal criminal complaint Saturday with attempting to destroy the plane Friday on its final approach to Michigan's Detroit Metropolitan Airport, and placing a destructive device on the aircraft, the Department of Justice said.

A family source told CNN that Mutallab -- who recently retired as chairman of First Bank PLC, one of Nigeria's premier banks -- had contacted the embassy in Nigeria's capital, Abuja, and various other security agencies earlier than the timeline provided by the administration official. The family source said Mutallab went to those agencies about three months ago after receiving a text message from his son.

The family member said Abdulmutallab "had no family consent or support," adding he "absconded to Yemen."

Mutallab's information about his son was forwarded to the National Counter-Terrorism Center, and Abdulmutallab was added to a general watch list, the senior administration official said. But the official said "the info on him was not deemed specific enough to pull his visa or put him on a no-fly list."

Abdulmutallab was arrested Friday and made an initial court appearance Saturday afternoon at the University of Michigan Medical Center in Ann Arbor, where he was being treated for severe burns suffered when he ignited a small explosive device. Read the federal criminal complaint and affidavit

The fire was put out and he was subdued by crew members and passengers, and the plane landed shortly thereafter. He was taken into custody for questioning by the FBI, authorities said.

A preliminary FBI analysis found that the device contained PETN, also known as Pentaerythritol Tetranitrate, a highly explosive chemical compound. In addition, FBI agents recovered what appear to be the remnants of a syringe from the vicinity of Abdulmutallab's seat, believed to have been part of the device.

Video: Security around the world

Abdulmutallab was granted a multiple-year, multiple-entry tourist visa at the U.S. Embassy in London in June 2008, the administration official said. He was a student in London at the time, and there was "no derogatory information that would have prevented him from getting a visa," the official said.

British Prime Minister Gordon Brown, in a statement Saturday, said, "The security of the public must always be our primary concern."

Britain's Home Secretary Alan Johnson said Saturday he is following developments closely and has assured the public that police in Britain are working closely with U.S. investigators "to uncover the full background to the incident."

Read more about the investigation in the U.K.

When Abdulmutallab returned to Nigeria from London, he told his family he wanted to get a second college degree in Egypt or Saudi Arabia, the family source said. The family refused, because they were worried that he may have developed ties to some dubious people. He went to Dubai, instead, the source said, where he sent a text message saying he had gone to Yemen to start a new life, and that it would be difficult for anyone to reach him because he had thrown away his SIM card.

Abdulmutallab's father notified the U.S. Embassy with information on his son, saying the family feared he went to Yemen to participate in "some kind of jihad."

A federal security bulletin obtained by CNN said Abdulmutallab claimed the explosive device used Friday "was acquired in Yemen along with instructions as to when it should be used."

Yemeni authorities have yet to receive official information on the terror attempt, according to a Yemeni official who asked not to be named because he is not authorized to speak to the press. But, the source said the country's government will take immediate action once the attempted bombing suspect's alleged link to the country is officially identified.

Earlier Saturday, the Netherlands' national coordinator for counterterrorism told CNN that Abdulmutallab had gone through "normal security procedures" in Amsterdam before boarding the flight to Detroit, Michigan, and those were "well-performed."

The initial impression is that the suspect was acting alone and did not have any formal connections to organized terrorist groups, the U.S. administration official said. See passengers' accounts

U.S. Rep. Bennie Thompson, D-Mississippi, who chairs the House Committee on Homeland Security, said the attempted act of terrorism would be the focus of an oversight hearing next month.

"The committee will get to the bottom of what did and did not happen with Mr. Abdulmutallab and what security precautions need to take place in the future," Thompson said.

In Nigeria, the government said Saturday that it "received with dismay the news of attempted terrorist attack on a U.S. airline" and has ordered its security agencies to investigate the incident.

"While steps are being taken to verify the identity of the alleged suspect and his motives, our security agencies will cooperate fully with the American authorities in the on-going investigations," said Dora Akunyili, Nigeria's minister of information and communications.

"We state very clearly that as a nation, we abhor all forms of terrorism."

Officials from the Nigerian Embassy in Washington, D.C., have flown to Michigan "to gain Consular access" to the suspect, the embassy said in a statement Saturday. The embassy said it plans to cooperate with U.S. authorities in the case.

An official with the U.S. Transportation Security Administration told CNN there will be increased security measures taken on international flights to the United States. The official advised travelers to allow for extra time before the flight. There will be no change in the number of carry-on bags allowed.