Milestone moments in battle against cancer

(CNN) -- Greek physician Hippocrates was the first to use the words "carcinos" and "carcinoma" in 400 BC to describe tumors, which led to the term "cancer" being coined. 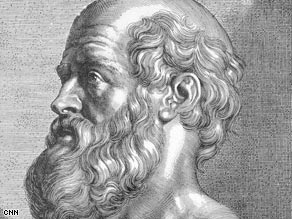 Greek physician Hippocrates was the first to use the words "carcinos" and "carcinoma" to describe tumors, which led to the term 'cancer."

Since his day, medical advances in the treatment of cancer have evolved significantly. Below we chart some of the key moments in the battle against cancer.

1895 -- Wilhelm Conrad Röntgen discovers X-ray radiation, which makes the detection of tumors in the body much easier and non-invasive. Later in 1899, Tage Anton Ultimus Sjogren becomes the first person to successfully treat cancer with X-rays.

1896 -- Removal of the ovaries is performed for the first time to treat breast cancer.

1898 -- Marie and Pierre Curie discover radium and later use it to treat tumors.

1943 -- The first electron linear accelerator is designed for radiation therapy. Today, it is widely used for treatment of cancer.

1964 -- The Epstein-Barr virus is linked to human cancer for the first time.

1974 -- Dr. Lawrence Einhorn finds a cure for advanced testicular cancer. This changes the cure rate from 5 percent to 60 percent.

1975 -- Scientists Georges Kohler and Cesar Milstein develop tailor-made antibodies in large quantities in a laboratory, leading to ways of attacking cancer and diagnosing disease. They go on to win the Nobel Prize in 1984.

1976 -- Michael Bishop and Harold Varmus discover oncogene, a gene that, when mutated or expressed at high levels, helps turn a normal cell into a cancer cell. They win the 1989 Nobel Prize.

1980s -- Anti-nausea drugs are developed to suppress the side effects of chemotherapy.

1998 -- Tamoxifen, a drug that helps reduce the risks of breast cancer by half in women is approved for wide use by the U.S. Food and Drug Administration (FDA).

2004 -- The FDA approves Avastin, a monoclonal antibody that restricts tumor growth by blocking the formation of new blood vessels for the treatment of metastatic cancer.

2008 -- German scientist Harald zur Hausen wins a Nobel Prize for his research that found that oncogenic human papilloma virus, or HPV, causes cervical cancer, the second most common cancer among women. He made the discovery in the early 1980s.