(CNN) -- Even in tough economic times, you may find yourself with a bit of cash to spare. You've been working hard, and you want to treat yourself. Should you spend it on an experience, such as a baseball game or concert, or a material object? 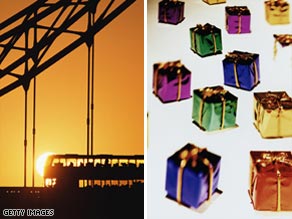 An experience may generate positive memories that outlast the allure of a new material possession.

That's in part because the initial joy of acquiring a new object, such as a new car, fades over time as people become accustomed to seeing it every day, experts said. Experiences, on the other hand, continue to provide happiness through memories long after the event occurred.

Ryan Howell, assistant professor of psychology at San Francisco State University, presented his findings this week at the Society for Personality and Social Psychology annual meeting.

Watch for more on the study »

The study looked at 154 people enrolled at San Francisco State University, with an average age of about 25. Participants answered questions about a recent purchase -- either material or experiential -- they personally made in the last three months with the intention of making themselves happy.

While most people were generally happy with the purchase regardless of what it was, those who wrote about experiences tended to show a higher satisfaction at the time and after the experience had passed.

The most striking difference was in how participants said others around them reacted to either the purchased object or experience. Experiences led to more happiness in others than purchases did. A sense of relatedness to others -- getting closer to friends and family -- may be one of the reasons why experiences generate more happiness.

"When people spend money on life experiences, whether they also take someone with them or buy an extra ticket or whatever, most of our life experiences involve other individuals," Howell said. People were fulfilling their need for social bonding while having these experiences, he said. Visit CNNhealth.com, your connection for better living

Another reason for increased happiness in experiences, the researchers found, was that people felt a greater sense of vitality or "being alive" during the experience and in reflection, Howell said.

"As nice as your new computer is, it's not going to make you feel alive," he said.

Most psychologists who study the phenomenon say people adapt to a new purchase in six to eight weeks, up to a maximum of three months, Howell said. That means the initial pleasure we get from a new possession generally fades in a matter of months.

Howell's study builds on earlier work by Thomas Gilovich, professor and chairman of the psychology department at Cornell University. Gilovich and colleague Leaf Van Boven's seminal 2003 paper "To do or to have: That is the question" found similar results about possessions bringing less happiness than experiences.

Experts also point out that people are less self-conscious when comparing experiences than they are about possessions. It will probably bother you more that your friend's home theater is better than yours than if your friend saw more sights on her South Seas vacation, Gilovich said.

Experiences form "powerful and important memories that I wouldn't trade for anything in the world," Gilovich said.

It's not just individuals who should be thinking about investing in experiences when making purchasing choices -- policy makers should also keep this reasoning in mind for their communities, he said.

"If you create municipalities with more parks, bike trails, more hiking trails that make experiences easier, then I think you're going to have a happier population," he said.

With Valentine's Day coming up, does this research mean you should give your honey a nice dinner or weekend getaway rather than a material present, such as a necklace or watch?

The issue of happiness conferred to others has been studied less, so the answer is unclear, experts said.

While Howell would expect this principle of experiences over possessions to still apply, Gilovich agreed that it may, but also points out that the act of giving or receiving an object as a gift is an experience in itself.

"Gifts of material possessions often become keepsakes and have sentimental value that increase with time, instead of diminishing like most material goods," Gilovich said.