One in three smokers would kick habit to protect pet

Pet owners will often go to any length to protect the health of their furry and feathered friends. Now a new survey suggests that one in three smokers would consider kicking the habit after learning that smoking poses a danger to pets. 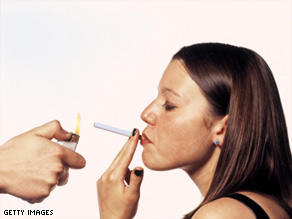 George Korin is a New York City veterinarian who has "seen bronchial disease in both dogs and cats, either due to home environment or air quality." Studies have linked smoke exposure to oral cancer and lymphoma in cats and nasal and lung cancer in dogs, says Korin, who was not involved in the new survey. Health.com: Dogs sniff out clues in the fight against cancer

Even birds can be victims: A 2007 study found a link between secondhand smoke, lung cancer, and eye, skin, and heart problems in pet birds.

The survey results are not a surprise, according to Korin. He's found that pet owners will do just about anything to safeguard their animals' health, including faithfully placing dogs with spinal paralysis into special carts each day so they have greater mobility. Health.com: Are cats or dogs better for your health?

"People are motivated to help their pets," says Korin. "At the least, they will do their very best to arrive at a diagnosis, even it involves fairly expensive procedures such as MRIs and CT scans." Pet owners spent an estimated $10.5 billion in the United States in 2008 on pet supplies and over-the-counter medications. Health.com: Puppy love hikes your health

The survey, which included nearly 3,300 pet owners, was published this week in the journal Tobacco Control. Overall, 28.4 percent of smokers said they would consider quitting after learning that secondhand smoke posed a danger to their pet. One in five smoking pet owners said they would ban smoking inside their home.

For doctors who treat people, this could be one more way to motivate smokers to kick the habit.

"Clearly people love their pets," says study author Sharon Milberger, of the Henry Ford Health System's Center for Health Promotion and Disease Prevention in Detroit. "This may be a way to reach them."

Because its participants were mostly from southeastern Michigan, researchers can't be sure it's representative of pet owners nationwide. And they're not sure if pet owners who say they'd quit smoking for an animal would actually do so. Health.com: How my pet helped me heal

"What people say and do are two different things, but it's an opportunity for additional research," says Milberger.

Currently, the researchers are conducting a follow-up study that follows pet owners who smoke to see if this motivation actually changes their behavior.

"We'll have to get a better sense of how this information could motivate people, but it potentially could be a way to target smokers from a new angle," she says.

All About Pets • Smoking