Is brain glitch to blame for financial crisis?

By Ramya Jaidev for CNN

(CNN) -- Forget incompetent financiers, weak regulations and big bonuses, scientists now say the real cause of the financial crisis could actually be down to a quirk of the human brain. 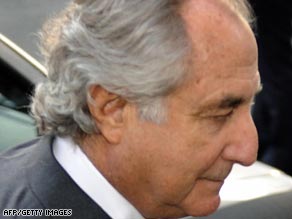 Failure to heed bad financial advice could have led to many falling victim to crooked financier Bernard Madoff.

According to a new neurological study by Atlanta's Emory University, expert financial guidance causes the brain to switch off, disengaging from its usual rational decision-making process.

"It's almost as if the brain stops trying to make a decision on its own," Professor Gregory Berns, who led the research, told CNN.

Berns' team studied 24 volunteers as they played a game in which they had to choose between an assured payoff and taking a gamble. Magnetic resonance scanners monitored changes in their brain activity.

The researchers noticed the scans showed activity in certain parts of the brain decreasing considerably when expert financial advice was offered.

"Normally, the human brain uses a specific set of regions to figure out the trade-offs between risk and reward, but when an 'expert' offers advice on how to make these decisions, we found that activity in these regions decreases."

The results reflect our natural tendency to defer to experts, that Berns argues is a product of our evolution as social animals.

"We are hardwired to care deeply about what other people think, and we will often suppress or change our own individual judgments when someone else offers an opinion.

"Our brains will make the assumption that other people know more than we do," he said.

Indeed, the results indicated that players tended to trust the "experts" even in situations where the advice didn't suggest the course of action that would lead to the highest payoff.

Berns says his research highlights how we should pay more attention to financial advice and question the motives of so-called experts, assessing their trustworthiness before submitting to their opinion.

But, ultimately, his conclusions do not differ from those most likely reached by many ordinary people currently feeling the economic strain -- that banking chiefs need their heads examined.

"Frankly, we should have everyone in the finance industry submit to brain scans," he says.