Why funny guys get the babes 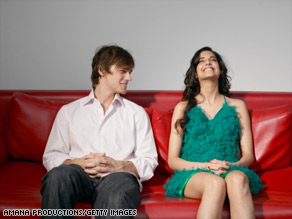 Women say they are more likely to have a long-term relationship with guys who present themselves as funny.

According to new research, women rate funny guys as more intelligent than guys who are not so funny. The research was presented this week at the British Psychological Society Annual Conference in Brighton, England.

"Over the course of history, women actively look for signs that their man is intelligent, and I believe the ability to actively judge the situation and pull off a joke and make you laugh is an intelligent feat," said Kristofor McCarty, a researcher at Northumbria University in Newcastle, England, and author of the study, in an e-mail.

McCarty's study asked 45 heterosexual women aged 18 to 30 to rate various self-descriptions of men, some funnier than others.

He invented the fictional lives of 10 men and then created a funny and not-so-funny vignette from each of their perspectives. Then, participants read all 20 descriptions and rated them on qualities such as likeliness of friendship, likeliness of long-term relationship, honesty and intelligence.

One example the study designated as high-quality humor was this: "I was standing in a mental illness ward the other day when I heard a doctor speaking to a new nurse on the ward. He was really giving her a telling-off, and his parting words were, 'And remember, when it's busy, don't go around saying it's a madhouse,' " McCarty said.

By contrast, a statement low on amusement was, "I was out skiing last year when I ended up slipping all the way down the mountain."

To set a general standard of humor, McCarty did a preliminary study to test which jokes and humorous statements were the funniest on 35 females aged 18 to 30.

Women said the men with the funniest descriptions were significantly more likely to be candidates for long-term relationships, as well as friends. Participants also rated the more amusing men as more intelligent and honest.

Previous research in evolutionary psychology has indicated that for long-term mating, women value a man's likelihood of acquiring resources: for instance, someone likely to earn a good salary. That idea recalls the early days of humans, when women relied on men's resources during childbearing years.

The study, though small in sample size, also relates to this model. A more intelligent person is less likely to fall into traps, McCarty said, and may be more able to provide for a mate and children. Read more about the brain and human behavior

Given that laughing makes people feel better, it also makes sense evolutionarily that women would prefer men with a good sense of humor, especially to help with the hardships of taking care of children, said Helen Fisher, biological anthropologist and author of the recent book "Why Him? Why Her? Finding Real Love by Understanding Your Personality Type."

"People who have a good sense of humor may be likely to lighten up very bad situations and therefore reduce the stress response and simply enable you to get over the hump in bad parts of the relationship," said Fisher, who was not involved with McCarty's study.

Humor also helps creativity, said Peter Derks, professor emeritus of psychology at the College of William and Mary in Virginia, who did not work on McCarty's study. The field of positive psychology -- which looks at well-being and happiness -- posits that humor leads to happiness and happiness leads to health, he said. This suggests that humor does have some survival value as well.

But humor is not used only in long-term sexual relationships, McCarty said. It plays an important role among friends and "also developed as a desired trait in friendship for social reasons," he said.

Do men also think funny women are more intelligent and honest? Time constraints prevented McCarty from exploring this question, but he said research suggests that men don't care much about women's sense of humor.

"A man wants a woman who laughs at his jokes and is not too bothered if his girl isn't funny at all," McCarty said.

On the other hand, Derks said, researchers have found that women who are good at being funny -- eliciting laughter -- are seen as positively as are funny men.

Here's another tidbit from the British conference: Research indicates that "computer rage" -- including shouting at your computer and hitting the keyboard and mouse -- has become a common expression of anger and stress relief.

John Charlton of the University of Bolton, who presented at the conference, said these expressions were mostly linked to unsatisfactory work progress and time pressures.