(CNN) -- Thomas the Tank Engine, whose television adventures on the fictional island of Sodor have delighted children around the world for years, is now on a real-life mission to help kids with autism. 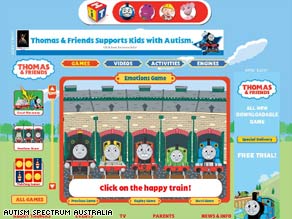 The steam locomotive and his friends are the stars of a new game in Australia, designed to help autistic children recognize emotions.

Autism Spectrum Australia (Aspect), a nonprofit that provides services to people diagnosed with the developmental disorder, unveiled the game on its Web site Tuesday.

The game asks players to recognize which engine has a sad face, or which is happy or angry.

Each time a child plays the game, he/she is presented with a different sequence of emotions. In doing so, the game takes advantage of the single-mindedness of autistic children to assist in their development.

"It's a great way to help develop social and communication skills," said Anthony Warren of Aspect.

A study conducted in the United Kingdom found that autistic children were far more fascinated by the television series, "Thomas and Friends," than they were with other fictional characters.

The study, by the National Autistic Society, summarized that the show held such appeal because of the clear facial expressions of the characters, the pacing of the program and the easy-to-follow story lines.

"We got those results down here, and we thought, how could we leverage that strength and give a little back to the community?" said Tom Punch with Haven Licensing, the company that handles licensing for the characters in Australia.

Warren said one of the reasons Thomas is particularly stimulating and motivating for children with autism is that it's very predictable.

"Children can understand the clear visual messages -- the big smile on the front of the engine," he said. "The messages it communicates are very concrete, not abstract. And the emotions are primary emotions. It's uncomplicated."

Autism is a developmental disorder that affects physical, social and language skills. It usually appears before age 3, though the earliest signs are subtle.

More doctors and researchers are referring to "autism" as "autisms," because each child's case is different, as are the causes, helpful therapies and potential treatments.

The Australian nonprofit unveiled the game this month to coincide with Autism Awareness Month in that country.

After all, as the show's theme song attests: "Red and green and brown and blue; They're the really useful crew."