LONDON, England -- John Symons lost his wife Jo to a mysterious cancer two years ago. But he isn't done battling the disease. 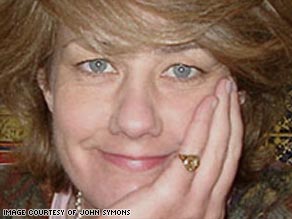 The CUP Foundation was founded in memory of Jo Symons, who died in 2006 of the mysterious disease.

Jo suffered from cancer of unknown primary, or CUP, a diagnosis that is given when doctors find cancer in the body but aren't able to identify where it began.

That inevitably complicates treatment, as doctors are at a loss as to whether they are dealing with breast, lung or countless other types of cancer.

"Any cancer diagnosis is devastating for patients and loved ones. But not knowing where in the body the cancer has originated and what type of cancer we are dealing with is a double blow, it's double agony," Symons told CNN.

After his wife died in 2006, Symons abandoned his career as a business school professor to set up the Cancer of Unknown Primary Foundation, also known as "Jo's friends."

The charity aims to raise awareness of CUP and campaigns for more research in the hope that it will lead to better treatment.

Symons said he also wanted to help others faced with the challenging diagnosis. People from 35 countries visit the foundation's Web site. "Most of them say there's nowhere else [for them to turn to]," he said.

It is unclear how many people are faced with the cancer of unknown primary worldwide, but according to Symons, 3 to 5 percent of all cancers are CUP.

The CUP Foundation estimates that in the UK alone, more than 10,000 people are diagnosed with the mystery disease annually, giving it a higher incidence than pancreatic and ovarian cancers.

Find out more about rare conditions »

Cancer needs to be treated by identifying the anatomical location of where the cancer has started, and therapy is always based on where that cancer starts in the body, Symons explained.

In the case of CUP, the cells lose their unique features as the cancer spreads. "So if you don't know where the cancer has started, it is very difficult to treat it," he told CNN.

Many CUP sufferers have just weeks or months to live after the cancer has spread. Jo died at the age of 46, only eight months after being diagnosed.

Jo discovered she had cancer when she developed a lump in her neck, according to Symons. But it was only a secondary tumor, and doctors believed the primary tumor was too small to locate or possibly had already disappeared.

At first, the Symons were hopeful: "We kept thinking it's only a matter of time before someone figures out where this comes from and are able to treat it, that we'd have good news and that while she might not be cured, she would be able to live with the cancer."

But as time went by, they realized this wasn't going to be possible.

Doctors first thought Jo might have ovarian cancer, but ruled that out after several tests. Subsequently they thought it might be breast cancer, so Jo underwent grueling chemotherapy treatment for several months.

That didn't help, and further tests were conducted to try and identify the genetic profile of the tumor where the cancer originated. These tests suggested Jo might be suffering from pancreatic cancer.

For the last months of her life, Jo was treated for pancreatic cancer. "But sadly, that was too late, even if it had been the correct diagnosis, to turn the tables," Symons recalled. He never found out what cancer his wife had suffered from.

"It has been difficult for me," Symons said. But faced with the choice of putting the ordeal behind him or trying to do something about it, he picked the latter.

"In a sense this charity has been therapeutic." But at the same time, "I'm living daily with a reminder of what it is like for people to go through this terrible disease."