By Lisa Young
For CNN

CNN's global health show Vital Signs takes a look at rare diseases this month. Here Lisa Young, the mother of Mandy Young, who suffers from an illness that took doctors 22 years to diagnose, describes her family's agonizing quest for answers.

CONYERS, Georgia (CNN) -- "Your daughter is a walking time bomb." We have been told this more times than I like to remember. We have lived every day not knowing if the next breath she takes will be her last. 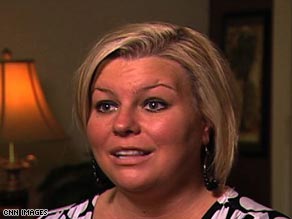 After 22 years in the dark, Mandy Young is grateful to finally have a name for her condition.

Her illnesses come so quickly. It's a daily battle of fear, worry, misery, faith and hope. She has been in the hospital more than 100 times. She has suffered one life-threatening infection after another.

We share her story, our story, in hopes of helping others.

We make sure that Mandy knows this is not just her illness.

It's our families' life, our journey. She is not in this alone. It's extremely hard living a life so mysterious that doctors and scientists named her rare disease after her. It's our story about "Mandy's Disease."

Mandy was a healthy, nine pound, green-eyed beauty -- until the day she was diagnosed with Spinal Meningitis.

Hours and days crept by, waiting every four hours for our ICU visit, 10 minutes of torture.

"Your daughter is very sick. Her mind is surely in a vegetated state from the seizures she continues to have. The stroke that she suffered has caused the left side of her body to be paralyzed," the doctors said.

See photos of Mandy throughout her ordeal »

"She is in a coma and we see no way she will wake up. We really don't think she will live through the night. It's time to tell her goodbye," they continued.

Mind spinning, stomach churning, feeling like I've had the breath knocked out of me, I whispered, "NO." "No. We won't tell her goodbye. And you can't either. She has to fight. She has to know that we want her to fight."

By day five, after six trips to doctors and emergency rooms, when her eye was swollen beyond seeing and looked like a piece of raw meat, we were finally able to beg her doctor for more aggressive testing.

Surgery, biopsies and a diagnosis. Nisseria Meningitides. Her eye would be replaced with a glass eye. But only if she lived.

Watch Mandy talk about her illness on Vital Signs »

At 21 months. Spinal Meningitis again. The same promises of certain death. ICU. Seizures. A 106 degree temperature raged. "There is no way that she has the strength to fight off another infection of this magnitude. It's time to let go. We're losing her by the minute."

After the first bout of meningitis we were told, "No one gets it twice. Live your life and enjoy your child!" Then, bout two. Although not the same type of meningitis, it was the same family.

It's rare to have it twice. But impossible to have it three times. But time three did come. "You have to find out why this keeps happening. She can't go through this again. What can you do?" we pleaded with the doctors.

They told us it could possibly be immune deficiency. This was the first time we heard this term.

Mandy was discharged and our journey for a reason began. Our lives were changed forever. Twice a week for the next two years, we handed her over for blood to be drawn. She went into isolation. Daily preventative antibiotics.

But nothing stopped the madness of these infections. One fever blister on her lip turned into hundreds during a nap. She was hospitalized on oxygen as the blisters took over her lungs. Double Pneumonia. Scarlet Fever. Ear infection after ear infection.

Surgically implanted tubes in her ears, infection, tubes out, surgery, tubes in. 11 times. An abscess the size of a cantaloupe in her abdomen.

The grueling, sometimes gruesome, immune studies continued. The only clue continued to be her low white blood count. Everything else, normal. The turmoil in my heart was insane.

Years passed. Mandy's illnesses continued. Immune studies continued. Still we had no answers. We traveled the country begging for someone to study her. "Her body is further advanced than medicine. The test hasn't been invented yet to define her deficiency." This was the standard answer.

But, someone had to have a new test that could give us our answers. And then the time bomb that we had only been warned about exploded.

Gas Gangrene and Clostridia Septicemia. A combination not seen since WWII. "She's fighting to stay alive. Five percent chance to live," the doctors said. ICU. And then, in an attempt to save her life, they began to amputate her leg. Before they stopped the spreading, her leg and hip were gone.

As she lay in a coma, we prayed for help. Our search for a research specialist intensified. That's when we found Dr. John Gallin at the National Institutes of Health (NIH) in Bethesda, Maryland.

Mandy is 27 now. Her immune studies began when she was two in 1983. And in May 2003, we received an email that said, "At long last we have discovered the basis of Amanda's problem."

Mandy has a genetic defect, called IRAK-4. Her body doesn't recognize infection and doesn't produce the cells needed to fight it off.

She is still studied at the NIH in hopes of finding a treatment or cure for her disease. And although finding a cure for her would be the ultimate gift, knowing that we have a name for her illness is the prize.

We searched for a name for twenty years for Mandy disease. We spent weeks and months with her, in hospital after hospital, praying for her to live through her sickness. And to know that we have Dr. Gallin and his team in the background working on her behalf is incredible!

Dr. Gallin did what he said he would do and stayed with Mandy until her diagnosis was made. Now the journey continues as we search for a treatment or cure.

But in the meantime, Mandy is beginning a career in motivational speaking.

Of her doctors at the National Institutes of Health she says: "They are like my family too, and I get excited about seeing them. NIH, or 'the House of Hope,' is just that.

"A place for families to find hope, just like we did."