Experts reveal best ways to save an aging brain

Want to keep your wits sharp as the years go by? You're not alone. Most people are worried about losing their memory as they age, and a new study shows it's a valid concern: In fact, at 53 percent -- more than half of all people -- have at least a minor mental decline in their 70s and 80s, and about 16 percent develop more serious problems with memory and other mental functions as they age. 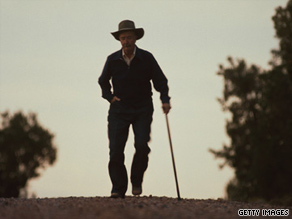 "It really is never too late to start exercising," says one expert. Even steady walking can help the brain.

The good news is that many people don't experience mental decline, according to a study published in the journal Neurology. About 1 in 3 people in the study breezed through their 70s and into their 80s without any memory problems. What's more, when the researchers took a close look at this group, whom they call "cognitive maintainers," they found evidence that although genes or illnesses can increase the risk of memory loss, there are still many things you can do to save your aging brain.

It seems that exercise is key, and mental activity and a vibrant social life can't hurt, either.

"There are some things that you can definitely take charge of, and not only will they benefit the brain but benefit the rest of your body," says Jennifer Weuve, M.P.H., Sc.D., an assistant professor at the Rush Institute for Healthy Aging, who was not involved in the study. "There seems to be a little bit that may be within our control. It's not a given that your brain has to go down the tubes."

Here's what the research team, led by Alexandra J. Fiocco, Ph.D., of the University of California, San Francisco, found:

• Stay in school: High school graduates were 2 to 3 times more likely to be cognitive maintainers, compared to those with minor memory loss. Those with a ninth-grade literacy level or higher were 4 to 5 times as likely to maintain their mental capacity with age.

• Quit smoking: Chalk up one more advantage of steering clear of cigarettes. Nonsmokers were 1.84-fold more likely to be in the "no memory loss" category compared with those with minor decline.

• Exercise: People who engaged in moderate or vigorous activity at least once a week were 1.34-fold more likely to be memory maintainers. Health.com: Getting my butt out of bed: How I became a morning exerciser

• Stay connected: People who lived with someone had a 1.24-fold higher chance of being a memory maintainer, and the same was true for those who did volunteer work.

Fiocco and her colleagues followed 2,509 healthy men and women over an eight-year period. All the study participants were either black or white and in their 70s when the study began.

The study is observational -- meaning the researchers followed people over time -- rather than interventional (say, having some people watch TV and others read a book), which is the gold standard for research proving cause and effect. However, the findings do dovetail with what other interventional studies have found, experts say. Health.com: Simple changes to improve your mind, mood, and outlook

Of course there are some uncontrollable factors that affect the brain as you age. For example, the study found that whites were more likely than blacks to maintain their cognitive function with age. And people with hypertension, diabetes, or a gene called apolipoprotein E-e4 were at greater risk of memory loss with aging. (About 25 to 30 percent of people in the general population carry one or two copies of this gene, which is inherited from one or both parents.)

However, even if you didn't finish high school or have other factors you can't change, you can still challenge your brain to preserve mental function, Fiocco says. Interacting with other people through volunteering, work, and other social activities is also an important way to stimulate and challenge the brain, she adds. "Isolation is very dangerous."

Michelle Carlson, Ph.D., the associate director of the Center on Aging and Health at Johns Hopkins School of Public Health, in Baltimore, agrees: "It's about the activity; it's about being engaged and being out there." Health.com: Drink this tea to lose that belly

Carlson is running a study called the Experience Corps Trial, in which older men and women volunteer to teach reading skills to kindergarten through third graders in Baltimore city schools. Using brain-imaging studies, Carlson and her colleagues have shown that after just a few months, people who volunteer show beneficial changes in their brains similar to those that other research teams have seen with exercise.

And just how much exercise is needed? Not much, according to Carlson, who notes that studies have shown benefits for older people who walked a total of 90 minutes a week. Health.com: The best home gyms under $200

Carlson says that many of her subjects are black and hail from low-income neighborhoods; they are at a greater risk of cognitive decline, she explains. But studies like Fiocco's suggest that it may be possible to turn "decliners" into "maintainers" by encouraging social and intellectual engagement.

"It really is never too late to start exercising," says Kirk Erickson, Ph.D., of the University of Pittsburgh. "Even people who remain sedentary most of their life can benefit from participating in an exercise regimen." Walking at a steady pace 3 days a week for 30-45 minutes per day "is enough to actually enhance cognitive function and reverse some of the deficits that may be occurring with old age."

"The second thing that is important for keeping a healthy brain as you age is to remain intellectually curious," he says. "That is, don't be afraid to learn new things. Pursue things that you find interesting and try to search out new and novel avenues for your mind and brain to work on."

All About Aging and the Elderly • Dementia • Alzheimer's Disease