Should Americans banish the burger?

(CNN) -- Hamburgers are an American passion. And millions of Americans consume burgers, and other forms of meat, every day without consequences. 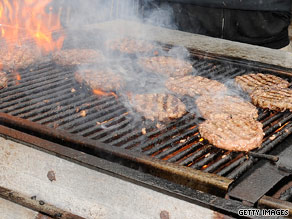 Should Americans continue to make meat -- and particularly hamburgers -- part of their diet?

But ground beef contaminated with E. coli bacteria has sickened, paralyzed and even killed some people who ate it.

On Monday night's "Larry King Live," a wide range of guests joined an in-depth and spirited debate to answer this question: Should meat, and most specifically hamburgers, be a part of the American diet?

One person who has said "no" to burgers is Bill Marler, an expert on foodborne illness litigation. Marler has been litigating on this issue since the Jack in the Box E. coli outbreak in 1993.

"What happens in hamburger is the E. coli bacteria is in the guts of cows. And during the slaughtering process, those guts are nicked or there's fecal material on the hides. It gets on the red meat," Marler explained to King.

"And when you cook a steak, assuming that steak hasn't been penetrated, you can kill the bacteria that's on the outside of the meat. It's not on the inside of the meat. But when you ground that meat up, that E. coli is in there," he said.

For Barbara Kowalcyk, the issue is professional -- she's director of food safety at the Center for Foodborne Illness Research and Prevention. But the issue is also deeply personal -- her 2-year-old son, Kevin, died of complications due to E. coli infection in 2001.

Kevin "went from being a perfectly healthy, beautiful child to being dead in 12 days. It was unbelievable," Kowalcyk told King.

Despite her devastating loss, Kowalcyk and her center are not taking a total stand against meat.

"We do not want to tell people what to eat or what not to eat," she said. "We want consumers to have the information they need to make educated choices about what they feed themselves and their loved ones. And we want better protections in this country for food. Americans believe that their food is safe, and they have a right to know the risks."

Patrick Boyle, president and CEO of the American Meat Institute, told King that the stories of people sickened or killed by E. coli infection are tragic, but there is a wider context.

"Americans consume a billion meals a day -- the vast, vast, vast majority of them safely and enjoyably," Boyle said. "And the positive development here is that these kinds of tragic illnesses are decreasing in America. These illnesses are down 60 percent in the last 10 years. So we are making significant progress."

Two steps are available to eliminate E. coli in the ground beef supply, Boyle said. One is irradiation, which is not widely used. The second is through proper cooking of the product.

For another guest, even the promise of contamination-free beef wasn't enough. Dr. Colin Campbell of Cornell University advocates a meat-free diet.

Campbell said he grew up on a dairy farm and for a long time held to the belief that animal protein was an essential part of a healthy diet. He said the results of years of research changed his mind.

The conclusion of his studies: "The closer we get to consuming a whole foods, plant-based diet, the healthier we're going to be on all accounts."

His research wasn't selling for Nancy Rodriguez, a professor at the University of Connecticut. She says meat is a key part of a good diet.

"I think that animal proteins provide essential nutrients that you are able to get in a unique package of foods for, let's say, about 200 calories -- a three ounce serving of meat," Rodriguez said. "And I think that when you make a choice to eliminate those animal products from your diet, it becomes a challenge, particularly for certain vulnerable populations such as infants and children, to get those nutrients in."

Rodriguez said people choosing a vegetarian diet have to be extra diligent to supplement their diet with iron, zinc and calcium.

Chef Anthony Bourdain, host of TV's "No Reservations," doesn't have a problem with meat consumption, but he has a big problem with how animals are raised and slaughtered.

"We have eyes in the front of our head. We have fingernails. We have ... teeth and long legs. We were designed from the get-go ... so that we could chase down smaller, stupider creatures, kill them and eat them," Bourdain said.

"That said, we may be designed to eat meat. We are not designed to eat fecal choliform bacteria," Bourdain said. He went on to blast the practices of larger meat processor and grinders as "unconscionable and border on the criminal."

Despite his disdain for meat industry practices, Bourdain thinks the push for an all-vegetarian diet is off-base.

"I think certainly we could eat better in this country. It would probably not be a bad thing if we ate less meat, if the ratio of animal protein to vegetables changed along the lines of the Chinese model. But to talk about eradicating meat is silly."

For one of Bill Marler's clients, 22-year-old Stephanie Smith, this debate has painful meaning.

In the fall of 2007, her nervous system was ravaged. She was left paralyzed after eating an E. coli-tainted ground meat patty. Marler talked about her recovery:

"She just entered into a rehab center today. The kid wants to dance again. I think it's very unlikely, but she's going to give it a shot. She's going to be in for six months. They're going to work, you know, hard physical therapy, occupational therapy. But she's got a long road to hoe. She's got risk of kidney failure. She suffered brain damage. And ... whether she'll walk again is another thing."

King asked Marler how the average person was to process the conflicting advice, especially with stories such as Smith's making news.

"I think what the lay person needs to do is spend a little bit more time putting pressure on their congressmen and senators to pass some food safety legislation that's been hung up in the House and the Senate," Marler said.

All About Meat • E. Coli