Commentary: Where the jobs really are

By John McWhorter
Special to CNN

Editor's note: John McWhorter is Senior Fellow at the Manhattan Institute and adjunct professor at Columbia University. His most recent book is "Our Magnificent Bastard Tongue: The Untold Story of English." 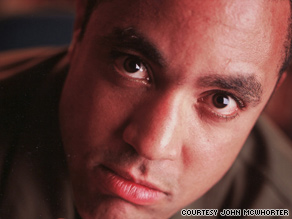 (CNN) -- President Obama's "No Excuses" address to the NAACP last Thursday has already gone down as one of his classics. Obama told the organization that even if black children are more likely to face obstacles, the job of black parents is to strive for the best for them regardless.

Okay, no excuses. Most black people agree and always have. But what can we actually do after we're done clapping?

Here's a suggestion: Let's work on what it means in 2009 to make sure black young people get good jobs.

Currently, it is considered the height of wisdom in some circles to intone something like this:

"Fifty years ago a man with just high school could walk down the street and get a factory job and feed a family. Now those jobs are all in China."

The problem is those jobs aren't coming back. And to just talk about the situation as it was during the Eisenhower administration and leave it there carries an implication. The people spinning out the usual line don't spell out what they mean, usually, but what they do mean is dire.

This month, Soledad O'Brien investigates what African-Americans are doing to confront the most challenging issues facing their communities. You'll meet people who are using ground-breaking solutions in innovative ways to transform the black experience.
Wednesday, 9 p.m. & Thursday, 8 p.m. ET

They mean that since young black people who don't go to college don't have jobs falling into their laps anymore, we can only expect that the men will sell drugs for a living while the women, "not seeing any opportunity," will have babies as teenagers.

In other words, no factory jobs means life for black people who don't go to college is "The Wire."

It's a "Who Moved My Cheese?" problem. Many of our best and brightest are teaching us that the proper response to a changing economy is to yell "Who moved my cheese?" instead of pursuing the cheese or switching to a different food.

President Obama showed us how to find the cheese last week, with his announcement of a $12 billion infusion to community colleges.

Now, if we're waiting for him to announce that 500 automobile factories will be shut down abroad and brought back here, with jobs requiring only a high school diploma and paying $90,000 a year, then this news about community colleges may not sound terribly exciting.

However, for those of us too impatient to wait for miracles, the real news is special. The president is committed to making community colleges better, and helping them match graduates to real jobs.

One of the most pernicious myths promulgated by people speaking for the black community is that you have to have four years of college at high tuition to have a decent existence.

But who installed your cable TV? Was it a white guy with a degree from Northwestern? Who fixed your air conditioner or your refrigerator when it last broke? How many sound technicians, building inspectors or mechanics fondly recount their days at UCLA?

The path to many of these jobs and others is community college. You spend a couple of years getting a certificate or an Associate in Arts degree. It's not expensive and loans are not hard to get.

People preaching that there are "no jobs" for young black people not on their way to BAs from Emory are unaware of the key role this kind of community college education can play in turning around young black lives.

It's well known that plumbers make a thoroughly decent living. Do you think air conditioner repairmen are living hand to mouth?

Sure, the economy is bad at present. But people sing the song about the old factory jobs even in the best of times, and this isn't exactly the first recession black people have pulled through. Things will get better. And this time, we should be prepared to take advantage.

We need to get the word out in churches, on black talk radio, and in high schools. Spending four years in college is just one of many pathways to a comfortable, constructive existence.

Otherwise, are we going to watch immigrants getting the same community college degrees and jobs our young people should be getting and then clap when someone tells us our unemployment crisis is because of "institutional racism"?

Let's make some real black history. In 2008, a black president was elected. But technically, that was something that happened to one guy, and already, there are those telling us that the main lesson in Obama's election is to not forget that racism still exists.

How about striving for this line in the black history books of tomorrow:

"By 2025, the black unemployment crisis was largely ended, as black people took advantage of community college programs bolstered under the Obama Administration to prepare for the blue- and white-collar jobs available in the post-industrial economy."

We are a people who had the initiative and persistence to sustain a mass migration from the South in search of employment. Now we have a new employment crisis. In times like these, clapping at speeches is just the beginning.

The opinions expressed in this commentary are solely those of John McWhorter.