How 6 people accidentally found a fortune

(Mental Floss) -- We've all been there: a week until payday, the rent is due, and you're rummaging in your parents' attic to find Dad's Mickey Mantle rookie card. 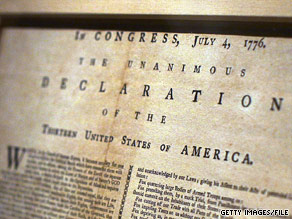 Only 36 of 200 official copies of the Declaration of Independence have been found intact since 1820.

If you're in need of some quick cash, here are six stories of people who found a fortune when -- and where -- they least expected it.

1. Lose a hammer, find a horde

In November 1992, a farmer living near the village of Hoxne in Suffolk, England, lost a hammer in one of his fields, so he asked Eric Lawes to use his metal detector to search for it.

While looking for the hammer, Lawes happened upon something else of interest -- 24 bronze coins, 565 gold coins, 14,191 silver coins, plus hundreds of gold and silver spoons, jewelry, and statues, all dating back to the Roman Empire.

As required by British law, the so-called "Hoxne Hoard" was reported to the local authorities, who declared it a "Treasure Trove," meaning it was now legally the property of Britain.

However, the government is required to pay fair market value for a treasure trove, meaning the farmer and Lawes split a cool £1.75 million (about $2.8 million).

The Hoxne Hoard is now on permanent display at the British Museum, drawing thousands of people every year.

Sadly, there is no word on whether or not the hammer was ever found.

2. Arkansas is a girl's best friend

It might surprise you to hear that he wasn't digging in one of the famous South African diamond mines at the time, but was near Murfreesboro, Arkansas, at a site that is now the Crater of Diamonds State Park.

Sitting on top of a volcanic pipe (a geologic tube formed by an ancient underground volcanic explosion), the park is the only diamond site in the world that is open to the public.

Best of all, the park's policy is: "You find it. You keep it. No matter how valuable it is."

But his wasn't the last valuable rock dug out of that Arkansas soil.

And the crown jewel of the park has been the "Strawn-Wagner Diamond," a comparatively small 3.09 carat diamond, that was dug up in 1990, and expertly cut down to 1.90 carat.

Despite its smaller size, the Strawn-Wagner stands out because it was given a "Perfect" rating by the American Gem Society -- the first diamond to ever receive such a high grade.

But don't think this list of big gems means the site has been tapped out. On average, two diamonds are found every day at Crater of Diamonds.

They're not all as big as The Uncle Sam Diamond, but maybe you'll get lucky. There's only one way to find out... Mental Floss: 10 diamond-encrusted things you don't need

If getting your hands dirty isn't your idea of fun, maybe you should start hitting garage sales and thrift stores to find valuables buried among the castoff bread machines and Members Only jackets.

Sometimes, one man's trash really is another man's treasure.

3. The Declaration of (financial) Independence

We've all heard of the man who bought a $4 painting at a garage sale, found an original copy of the Declaration of Independence inside, and sold it for $2.4 million. A once-in-a-lifetime story, right?

Not so much, actually.

Michael Sparks was visiting a Nashville thrift store, where he bought a candleholder, a set of salt and pepper shakers, and a yellowed print of the Declaration of Independence.

Sparks figured the document was a worthless, modern reprint, so he paid the asking price -- $2.48 -- and headed home.

After looking over the document for a few days, he wondered if it might be older than he initially thought.

So he hopped on the Internet to do some research and soon realized he had purchased one of only 200 official copies of the Declaration of Independence commissioned by John Quincy Adams in 1820.

It took a year for Sparks to have the print authenticated and preserved, and then he put it up for auction, netting a final sale price of $477,650.

The salt and pepper shakers, on the other hand, were still worthless.

4. A good Heade for bargains

One day, an employee at a tool-and-die company in Indiana spent $30 for a few pieces of used furniture and an old painting of some flowers.

When he got his new stuff home, he decided to strategically hang the picture to cover up a hole in the wall that had been bugging him.

Some years later he was playing a board game called Masterpiece in which players attempt to outbid one another for artwork at an auction.

Much to his surprise, one of the cards in the game featured a painting of flowers that looked a lot like the one he had on his wall.

So he went online and found that his painting was similar in style to the work of Martin Johnson Heade, an American still-life artist best known for landscapes and flower arrangements.

Through his research he found the Kennedy Galleries in Manhattan, which handles many of Heade's works, and asked them to take a look at his painting.

They agreed and were able to verify that the piece of artwork covering the hole in his wall was a previously unknown Heade painting, since named Magnolias on Gold Velvet Cloth.

In 1999, The Museum of Fine Arts in Houston purchased the painting for $1.2 million dollars.

I emailed the Museum to ask if the painting was covering a hole in the wall, but I didn't get a reply. Mental Floss: 6 really strange truck spills

As you go in search of your nest egg, keep in mind the old adage: "It's only worth what the market will bear."

Sometimes finding treasure is the easy part; finding someone willing to buy it can be the real challenge.

Every Sunday afternoon for the last seven years, Mary Hannaby had gone for a walk with her metal detector.

She'd never really found anything of value, but she liked getting the exercise, so she kept at it.

On one Sunday in June 2009, her detector beeped, and she bent down to dig up what she thought was going to be another common coin or old nail. Instead, she uncovered a postage stamp-sized gold pendant featuring an intricate carving of the crucifixion of Jesus.

Maybe she had finally hit the jackpot.

Upon inspection by the British Museum, the pendant was described as "an important find," and they estimated the market value to be around £4,000 (about $6,600).

Still, they decided not to purchase it for their collection, so Mary took the pendant to Sotheby's.

The experts at the auction house felt the piece was much more valuable, because it was believed to be one of only three similar items known to exist. Their initial estimate was £250,000 ($415,900), but said it could easily sell for as much as £2.5 million ($4.1 million) thanks to its resemblance to another English treasure also found with a metal detector, the Middleham Jewel.

But as the saying goes, "Never count your millions until the auctioneer bangs his gavel."

Sotheby's put the pendant up for auction on July 9, 2009, making it the highlight of a large lot of antique sculptures.

In 1992, Teri Horton, a retired truck driver, went to her local thrift store to buy a depressed friend a gag gift.

She found a rather large painting -- 66 inches by 47 inches -- that she thought was pretty amusing because it was, in her opinion, so ugly. When she asked the thrift store employee the price, they said $8. She haggled and only paid $5.

In the end, her friend didn't want it (she, too, thought it was ugly, plus it wouldn't fit through the door of her trailer), so Teri took it home and tried to unload it at her garage sale.

A local art teacher saw the painting and suggested it could very well be a Jackson Pollock. In response, Teri famously asked the teacher, "Who the f*** is Jackson Pollock?"

Since that day, Teri Horton has been struggling to prove that her thrift store treasure is a lost piece of artwork potentially worth well over $100 million.

However, due to the painting's lack of verifiable history of ownership (called "provenance"), the piece is disputed by many fine arts experts as simply another artist's work inspired by Pollock.

To find proof of Pollock, Teri had the work examined by a forensic specialist who claims to have found a fingerprint that matches one in Pollock's studio.

But even the fingerprint evidence has been disputed by the art world, leaving the painting, as yet, unsold.

Teri, her painting, and her battle with the art world elite became the subject of a 2006 documentary called, appropriately, Who the *$&% is Jackson Pollock?

All About Arkansas • Indiana • Nashville