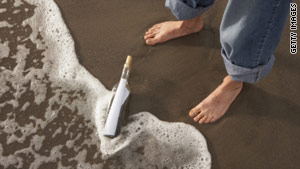 Sometimes connections between writers and recipients seem too significant to be written off as coincidence.
STORY HIGHLIGHTS

(Mental Floss) -- Whenever a message in a bottle is discovered on a beach or floating in the ocean, it feels like something out of a fairy tale. The idea that two people have made a connection that mathematics would say is virtually impossible gives us hope that life is more than a series of random events. Here are five stories of the almost unbelievable connections these messages have brought about.

1. A soldier to watch over them

When Josh Baker was 10 years old, he dumped an entire bottle of his mother's vanilla extract down the sink. He then wrote a quick note that said, "My name is Josh Baker. I'm 10. If you find this, put it on the news. The date is April 16, 1995." He stuffed the note inside the empty extract bottle and threw it into Wisconsin's White Lake.

Life went on and, after high school, Josh signed up for the Marines. During his tour of duty in Iraq, he survived the dangers of fighting door-to-door in Fallujah and made it back home to the U.S. safe and sound. Tragically, shortly after his homecoming, Josh was killed in a car accident, leaving his family and friends devastated and asking the obvious question, "Why?" A few months later, Steve Lieder and Robert Duncan, friends of Josh's, were walking on the banks of White Lake, when they saw something glimmer on the water. After fishing it out, they realized it was a vanilla extract bottle with a piece of paper inside.

To friends and family, the message from 10-year-old Josh appeared when they needed it most. It felt as though he was reaching out, letting them know that he was watching, and trying to help them move on. This message of hope is currently displayed in the Bakers' home as a constant reminder that their son is still with them, even though he's gone.

Ake Viking was a lonely Swedish sailor who decided to place his search for love in the hands of fate. He wrote a simple letter "To Someone Beautiful and Far Away," corked it inside a bottle, and tossed it overboard in the hopes that it might help him find a young woman to marry.

Two years later, in 1958, he was surprised to receive a letter from a Sicilian girl, Paolina, who said, "I am not beautiful, but it seems so miraculous that this little bottle should have traveled so far and long to reach me that I must send you an answer..." The two began writing one another and, three years after he threw a bottle into the sea, Ake moved to Sicily to marry his very long-distance love.

3. A ticket to freedom

During a 1979 cruise to Hawaii, Dorothy and John Peckham passed the time by writing notes and throwing them overboard inside empty champagne bottles. They asked anyone who found one of their bottles to write them back, and even went so far as to include a $1 bill to cover the postage.

On March 4, 1983, John's 70th birthday, the couple received a letter from Hoa Van Nguyen. Nguyen, a former soldier in the Vietnamese Army, said he and his younger brother had found one of the Peckhams' bottles as the two men were floating 15 kilometers from the shore of Songkhla Province in Thailand. They were braving the waters of the Pacific in a small, shallow riverboat in order to escape the Communist regime in Vietnam. When they saw the bottle, they felt as though a prayer had been answered, giving them the strength to carry on. After reading the letter, the Peckhams looked for Songkhla on a map and were shocked to find that the bottle had traveled 9,000 miles from Hawaii.

The Peckhams corresponded with Hoa for years, sharing in his joy when they received a photo from his wedding, then again nine months later when they saw his newborn son. But most of all, they empathized with Hoa's desire to give his family the best life he could. So when Hoa asked if the Peckhams could help his family move to the U.S., they didn't hesitate. After months of working with U.S. Immigration, the two families finally did meet in 1985, when a plane from Thailand landed in Los Angeles -- the Nguyens' new home.

In 1999, Steve Gowan spotted something clinging to his fishing nets. It was a very old bottle containing two letters written by Pvt. Thomas Hughes, dated September 9, 1914. The first message asked the person that found the bottle to forward the second message to Hughes' wife, Elizabeth. The note for Elizabeth was a nice, simple love letter, showing that his wife was in his thoughts as he made his way to France to fight in the early days of World War I.

After reading the letters, Gowan felt a great personal responsibility to see that they found their way home, even though he assumed Mrs. Hughes had died long ago. He began searching for her descendants and soon learned that Thomas and Elizabeth Hughes' daughter was still alive in Auckland, New Zealand.

Sadly, Hughes died in battle shortly after he wrote the letters, so he never got to see Elizabeth, nor his 2-year old daughter, Emily, ever again. Due to her young age at the time of his death, Emily never knew her father, though she grew up listening to stories about him from her mother and cherishing his posthumously award medals. So when The New Zealand Post offered to send Gowan to Auckland to hand-deliver the bottle to Emily, he jumped at the chance to help her connect to this lost piece of her past.

For Emily, the bottle was a great source of joy and comfort. She said her father's message couldn't come home "until the right boat came along at the right time with the right fisherman."

Mental Floss: Why bottled water has an expiration date

(Technically this isn't a "message in a bottle" story, but it's the same concept -- and the story is simply too good not to mention it.)

In June 2001, Laura Buxton, who was almost 10 years old, released a red balloon into the air over her hometown of Stoke-on-Trent in Staffordshire, England. On one side of the balloon, she had written "Please return to Laura Buxton," and on the other side, her home address. A few weeks later, a man 140 miles away in Milton Lilbourne found the balloon stuck in the hedge that separated his farm from the next-door neighbors. He noticed Laura Buxton's name and address and immediately took the balloon to the neighbors' house, showing it to the 10-year-old girl who lived there ... whose name was also Laura Buxton.

Laura Buxton from Milton Lilbourne wrote Laura Buxton from Stoke-on-Trent to let her know that she had found the balloon. Thinking this coincidence was simply too amazing to be true, they decided they had to meet in person. And that's when things got really weird.

On the day of the meeting, the two girls wore the same outfit -- a pink sweater and jeans. The girls were the same height, which was unusual because they were both tall for their age. They both had brown hair and wore it in the same style. They both had 3-year-old black Labrador retrievers at home, as well as gray pet rabbits. They both brought their guinea pigs, which were the same color and even had the same orange markings on their hindquarters. It was almost as though these two Laura Buxtons were the same person.

The strange events surrounding their meeting have helped the girls form a strong bond, and they remain friends eight years later. Both feel the circumstances that brought them together are too significant to be written off as mere coincidence.