(CNN) -- President-elect Barack Obama, who in 10 days will be sworn in using the Bible of his political hero Abraham Lincoln, visited the Lincoln Memorial in Washington on Saturday night with his family. 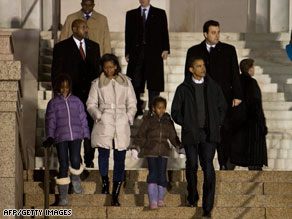 The Obama family walks down the steps of the Lincoln Memorial in Washington on Saturday.

Obama, wife Michelle and daughters Malia and Sasha made the unannounced stop shortly after 7 p.m. ET.

The family walked up the steps of the memorial on a chilly night in Washington and then visited the museum at the site. On the way out, they stopped at the edge of the reflecting pool.

The parents were seen pointing in the distance to the Capitol and the Washington Monument.

The Obamas spent about a half-hour at the memorial before returning to the Hay-Adams Hotel, where they are staying.

Watch the family at the memorial »

Obama will be the first president to use the Lincoln Bible for his inauguration since Lincoln used it in 1861. Inauguration organizers have said Obama's inaugural theme, "A New Birth of Freedom," was inspired by Lincoln's Gettysburg Address.

Learn more about the Lincoln Memorial »

The president-elect also plans a train trip from Philadelphia, Pennsylvania, to Washington three days before the inauguration, following the final leg of the train route taken by Lincoln.