WASHINGTON (CNN) -- The 1 to 2 million people expected to pour into downtown Washington for inaugural festivities will pose major challenges for the city, for law enforcement, and for the attendees themselves. 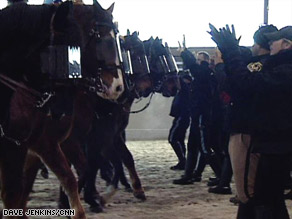 "Unprecedented numbers of Americans are planning to join us in Washington," President-elect Barack Obama said Wednesday in remarks released by the Presidential Inaugural Committee. "That will mean long lines, a tough time getting around, and most of all, a lot of walking on what could be a very cold winter day."

There is the potential for a lot of frustration.

Members of the general public will be funneled through metal detectors and other security screening to view the inaugural parade along Pennsylvania Avenue. The checkpoints will open at 7 a.m. and are expected to be closed by 10:30 a.m., when the parade route reaches its capacity of 300,000 to 350,000 spectators. The overflow will be directed to the National Mall. To systematically and calmly move people from the parade area to the mall, Washington police will have personnel moving through the crowd distributing maps and directions.

People who want to avoid some of the hassle can go directly to the mall area, where security checks will not be as intense. They cannot camp there overnight but can stand or sit in small chairs to stake out a space, according to a police spokesman.

For the first time, the entire mall will be open for inaugural spectators. It will hold about 20 giant screens showing the day's ceremonies.

Those screens and loudspeakers, as well as text messages, will all be used to communicate with the crowd if there is an emergency. Visitors are being encouraged to sign up ahead of the event to receive text alerts on their mobile devices.

Hani Mahmassan, a crowd control expert from Northwestern University, has briefed a wide array of security agencies involved in the inauguration on his studies of the annual Hajj pilgrimage made by millions of worshippers to the holy Saudi Arabian city of Mecca.

"People have learned from the mistakes that have been made there," he says. He notes, for instance, that stampedes have been caused by opening the gates to a mass of people all at once. "By trying to avoid these situations, I think one can minimize the negatives at these events," he says.

Crowds could also complicate law enforcement's efforts to do its job. If agents and task force officers are responding to an incident, avenues for them must be created, said FBI Assistant Director Joe Perschini.

Horses are among the most effective crowd control tools and they will be used to help disperse crowds at the inauguration if needed. "We will have more than enough horses to handle ... anything that occurs," says Lt. Stacey Collins, commander of the United States Park Police Horse Mounted Unit.

The weather is not expected to affect the animals. "We patrol [in] all weather. The only thing that will really stop us from patrolling is ice or either extreme heat ... or if it is so cold that it is not safe to be out. But we have more than enough equipment to keep us warm and the horses comfortable," Collins tells CNN.

Washington Police Chief Lanier says she believes law enforcement is ready for almost anything. "Nobody has a crystal ball," says Lanier, adding, "I think that we have planned through every potential situation that we can think of."

The capital city is used to large crowds, and Lanier thinks that experience will help. "The officers are very good at being authoritative and communicating large with crowds. I think that is the best chance we have -- the long history and experience we have with large crowds. But it is really going to be everybody being on their toes and just really trying to move those crowds."

Planners insist they are not trying to scare people away with the tight restrictions and ominous warnings.

"Our efforts are to make sure people are safe. We'd like for as many people to come as want to come," Secret Service spokesman Malcolm Wiley tells CNN.

CNN's Dave Jenkins and Eric Marrapodi contributed to this story.