Commentary: The real ties between Lincoln and Obama

By Harold Holzer
Special to CNN

Harold Holzer, co-chairman of the U. S. Lincoln Bicentennial Commission, is the author of the new book, "Lincoln President-Elect: Abraham Lincoln and the Great Secession Winter 1860-1861" and author, co-author or editor of 32 other books. 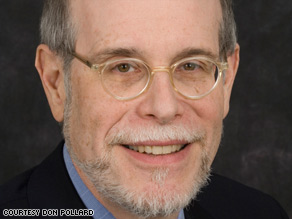 NEW YORK (CNN) -- They are big shoes to fill by any standard, political or historical.

Pointing to his oversize, specially made boots, Abraham Lincoln once confided that he may have been slow to put his foot down, but once he did, he never went back.

That's a lesson worth learning for any president-elect. And few incoming chief executives have been as conscious of the 16th president as the 44th: Barack Obama.

The new president-elect wrote about Lincoln in his acclaimed books. He not only chose to announce his candidacy for the presidency on Lincoln's birthday, in 2006, but did so outside the Old State Capitol in Springfield, Illinois, where Lincoln delivered his famous "House Divided" speech in 1858 and where he had his headquarters as president-elect.

The myriad comparisons between the two skinny, big-eared Illinoisans -- Obama's own fond description -- are already entering the realm of modern legend. Both were believed too inexperienced to be president.
See iReporters don stovepipe hats to pay tribute to Lincoln

Both were long-shot underdogs for their party's nomination. Yet each went on not only to win, but to nominate the defeated party favorite (who happened to be a senator from New York) as secretary of state. William H. Seward was Lincoln's choice, Hillary Clinton is Obama's.

But of course there are substantial differences: Lincoln got his education "by littles," he once embarrassingly admitted, spending less than a year all told in primitive one-room schoolhouses.

Obama was superbly educated at Columbia University and Harvard Law. One man was a Republican, the other is a Democrat.

And while Barack Obama scored an impressive victory, the nation divided bitterly over Lincoln's 39 percent plurality in a four-person race, to the degree that the Electoral College validation remained in question -- much more like Bush vs. Gore -- as late as February 1861, while seven Southern states seceded rather than accept a Lincoln presidency.

Yet fascinating similarities predominate. Both men wrote best-selling books (yes, Lincoln, too: he brought out a hugely popular edition of his Lincoln-Douglas debates).

Both won fame through their transcendent oratory. Both got into political trouble over their church affiliations -- Lincoln for leaving his church too soon, Obama for not leaving soon enough.

Both refused to take pets along to the White House, but promised to shower their small children with pets once they arrived (the Lincolns left their mangy dog Fido behind and President-elect Obama has vowed to get a dog for his girls once settled in Washington).

He might have to do better. Willie and Tad Lincoln eventually obtained kittens, turkeys and ponies.

And here is another fascinating side story. Both men felt the need to make one final visit -- before their life-altering presidencies -- for reunions with the women, neither one a natural mother, who helped raise them.

Obama, of course, went back to Honolulu to see his gravely ill grandmother right before Election Day; Lincoln, right before Inauguration Day, visited rural Charleston, Illinois, to say goodbye to his aged stepmother -- who wound up outliving him.

But most extraordinary of all, surely, is the fact that Barack Obama's victory serves to help complete the "unfinished work" Abraham Lincoln spoke about in his Gettysburg Address: that America fulfill its dream of equal opportunity regardless of race.

It is not difficult to understand why so many Americans see Barack Obama as the second coming -- of Abraham Lincoln, if not more. Lincoln once declared, "We cannot escape history," and after years of national indifference to, or defiance of, the lessons of the past, our next president seems to love, comprehend, and use the past to illuminate the future. iReport.com: Can you speak like Lincoln?

Comparisons can invite problems, too. On his triumphant election night, Obama properly noted that Lincoln faced a crisis far graver than our own, then quoted Lincoln's hope that "while passion may have strained, it must not break our bonds of affection."

Those words came right out of Lincoln's first inaugural address. But in fact they were written not by Lincoln himself -- rare for America's greatest writer-president -- but by his incoming Secretary of State Seward. Lincoln later performed an editing miracle to transform the draft into near-poetry.

Using this lesson, Obama should be asking Hillary Clinton for a draft.

But that probably won't happen. Sometimes reality trumps even history.

The opinions expressed in this commentary are solely those of Harold Holzer.